Abbas: Most Israelis back two-state solution

President of the Palestinian Authority Mahmoud Abbas addressed the UN General Assembly Thursday, saying he was certain that most Israelis were interested in peace and in the two-state solution.

"Therefore, what is required is to heed the lesson of history, to abandon the mentality of force and occupation, to recognize the rights of others, and to deal on an equal footing and parity to make peace," he said.

The PA president thanked the United Nations for recognizing Palestine as a non-member state.

Abbas further stressed that the Palestinians' quest for an independent state was not accompanied by delegitimizing the State of Israel.

"The current round of negotiations appears to be a last chance to realize a just peace," he said. "Merely thinking of the catastrophic and frightening consequences of failure must compel the international community to intensify efforts to seize upon this chance." 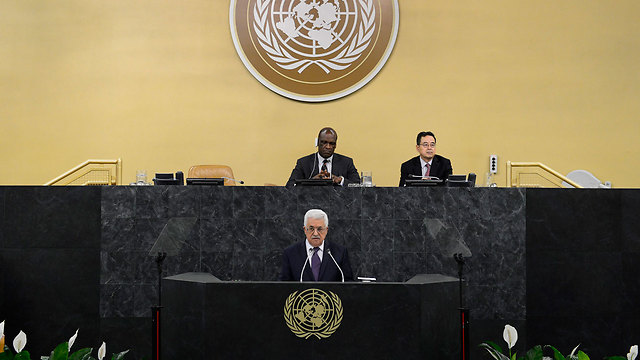 Abbas said he intended to continue talks with Israel with "an insistence on success" and the aim of reaching a peace deal within nine months.

He stressed, however, that the Palestinian Authority refuses to sign any temporary agreements and was determined to reach a permanent accord that will include all issues and will lead to the establishment of an independent Palestinian state with east Jerusalem as its capital.

"Our objective is to achieve a permanent and comprehensive agreement and a peace treaty between the state of Palestine and Israel that resolves all outstanding issues and answers all questions, which allows us to officially declare an end of conflict and claims," he said.

He urged the international community to ensure that agreements are not violated, referring, as he stressed "to the continuation of settlement construction on our Palestinian land, particularly in Jerusalem."

Abbas lauded the European Union's decision to ban West Bank settlements, stating it serves as a positive step that ensures the peace process is handled in a constructive manner.

The Palestinian president said that since January, "708 terrorist attacks have been perpetrated by settlers against our mosques and churches, and against olive trees, farming fields and homes and property of Palestinians."

UN spokesman Martin Nesirky said the UN legal affairs office had looked into whether Abbas would be allowed to use the head of state's chair near the podium of the General Assembly hall and decided that as a non-member observer state, he was. Nesirky said the legal precedent was that the Pope had been allowed to use the chair when he addressed the General Assembly as head of the Holy See, which is also a non-member state.

Abbas ended his speech saying his own dream is to see "a just peace" so this generation can pass on to their children and grandchildren "the flag of an independent state of Palestine" and urging the international community to intensify efforts to make this happen.

Abbas told Obama in a meeting on Tuesday on the fringes of the UN General Assembly that the Palestinians will exert every effort possible to try to ensure the peace talks are a success.

Obama, as well as Kerry, are due to meet Prime Minister Benjamin Netanyahu next week in Washington as they try to keep up the momentum in the peace talks between Israel and the Palestinians.