Iran and six world powers headed into nuclear talks at the UN on Thursday with US officials tamping down expectations of any quick breakthrough.

The meeting marked the highest-level direct contact between the United States and Iran in six years as Secretary of State John Kerry comes face-to-face with Iranian Foreign Minister Javad Zarif. It aimed to pave the way for the first round of substantive negotiations on Iran's disputed nuclear program since April.

Ashton noted talks between Iran, the five permanent members of the UN Security Council and Germany were "substantial" and have set the stage for a new round of negotiations over Iran's nuclear program next month. British Foreign Secretary William Hague said there had been a "big improvement in the tone and spirit" from Iranian Foreign Minister Javad Zarif.

German Foreign Minister Guido Westerwelle said the meeting had taken place in a "completely different tone, atmosphere and spirit" that what the group was used to and that a "window of opportunity has opened" for a peaceful resolution of the situation. He warned, though, that Iran's words would have to be matched by actions.

"Words are not enough," he said. "Actions and tangible results are what counts. The devil is in the detail, so it is now important that we have substantial and serious negotiations very soon."

Referring to the nuclear issue, Zarif also stated the meeting was constructive, but noted he hoped all sanctions against his country were lifted, as they were counterproductive to talks.

Shortly after the meeting, Iranian President Hassan Rohani delivered a speech in which he accused Israel of leading a smear campaign against Iran in order to distract public opinion from the issue of settlement construction.

Rohani and Zarif, both in New York this week to attend the UN General Assembly, have said they are anxious to clinch an agreement quickly that could bring their country relief from punishing international sanctions.

But the US insists Rohani must back up his calls for moderation with actions that verify Iran is not seeking to develop a nuclear weapon. In Washington, the White House resisted putting a timeline on the nuclear negotiations. "We're not expecting any breakthrough in this initial meeting," said White House spokesman Jay Carney. "But this is part of us testing the seriousness of the Iranians, who are obviously engaging in new overtures and showing new interest in trying to solve this very serious matter." Encouraged by signs that Rohani will adopt a more moderate stance than his predecessor Mahmoud Ahmadinejad, but skeptical that the country's all-powerful supreme leader will allow a change in course, President Barack Obama has directed Secretary of State John Kerry to lead a new outreach and explore possibilities for resolving the long-standing dispute. Kerry predicted the meeting would be worthwhile. Asked what he would need to hear from the Iranians to show that they're serious, he said: "I'll let you know after they've been serious."

Rouhani's pronouncements at the UN have raised guarded hopes that progress might be possible. But they have also served as a reminder that the path to that progress will not be quick or easy. 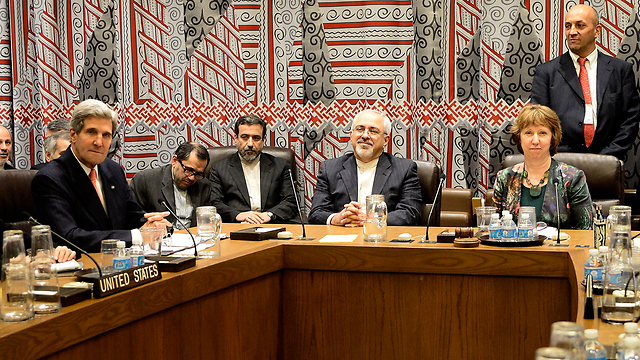 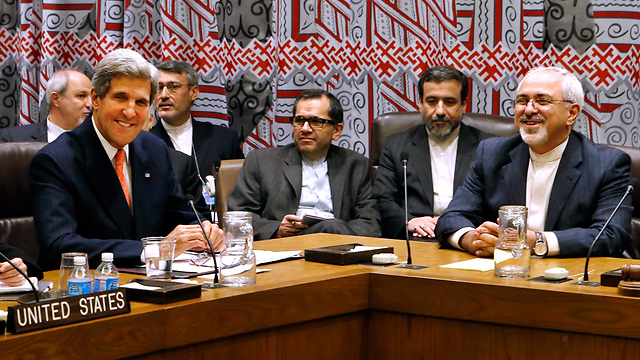 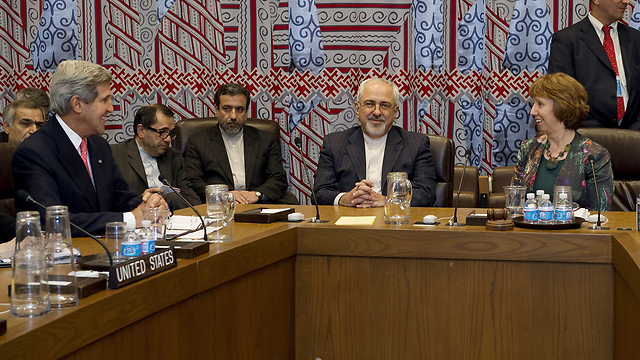 Photo: AFP
In his speech to world leaders at the UN on Tuesday, he repeated Iran's long-standing demand that any nuclear agreement must recognize the country's right under international treaties to continue enriching uranium. The US and its allies have long demanded a halt to enrichment, fearing Tehran could secretly build nuclear warheads. They have imposed sanctions over Iran's refusal to halt enrichment. Uranium enriched to low levels can be used as fuel for nuclear energy but at higher levels, it can be used to make a nuclear weapon. Rouhani also insisted that any deal be contingent on all other nations declaring their nuclear programs, too, are solely for peaceful purposes – alluding to the US and Israel. Those conditions underscored that there is still a large chasm to be bridged in negotiations. The United States, Britain, France, Russia, China and Germany will participate in the talks at the UN, with European Union foreign policy chief Catherine Ashton leading the talks. Rohani has made a series of appearances and speeches since arriving in New York and has held bilateral negotiations with France, Turkey and Japan among others. He has come across as a more moderate face of the hard-line clerical regime in Tehran and appears to be trying to tone down Ahmadinejad's caustic rhetoric against Israel – a point of friction in relations with the US. On Thursday, he called for worldwide disarmament of nuclear weapons as "our highest priority." "No nation should possess nuclear weapons, since there are no right hands for these wrong weapons," he told the first-ever meeting of a UN forum on nuclear disarmament. He was speaking on behalf of the Non-Aligned Movement, an organization of mostly developing countries. He repeated the organization's long-standing demand that Israel join the international treaty banning the spread of nuclear weapons. Israel, which has repeatedly accused Iran of aspiring to build a nuclear bomb is the only Mideast state that has not signed the landmark 1979 Non-Proliferation Treaty. The Israeli mission to the UN was closed on Thursday because of a Jewish holiday and did not have an immediate response to Rohani's comments. Rohani also met Japanese Prime Minister Shinzo Abe, who urged "concrete progress" on settling the nuclear issue. Abe also said the window of opportunity "will not be open forever," according to Japanese Foreign Ministry assistant press secretary Masaru Sato. Rohani responded that he aimed to settle the nuclear issue at "an early juncture," Sato said. It was the first meeting between leaders of Japan and Iran since 2008. Rohani was elected after a campaign that pledged to seek relief from the international sanctions. He has welcomed a new start in nuclear negotiations in hopes they could ease the economic pressure. He has said he has the full support of Iranian Supreme Leader Ayatollah Ali Khamenei, who has the final word on all important matters of state, including the nuclear question. Zarif, who Rohani has designated his lead nuclear negotiator, has urged step-by-step compromises to advance the negotiations. Iran watchers say Rohani may have limited time to reach a settlement – possibly a year or less – before Khamenei decides negotiations are fruitless. That may explain why Zarif has call to reach a deal in shortest timeframe possible. Already, Iran's powerful Revolutionary Guard force has grown increasingly uneasy over Rohani's outreach to the West as well as his apparent backing from Khamenei, who has told the Guard to steer clear of politics. The Guard has warned Rohani about moving too fast on his overtures.