Lebanon, Iran or Sudan: Where will Hamas leadership go?

Sensitive security situation requires head of Hamas political bureau, Khaled Mashaal, to live under near house arrest, now Mashaal and friends are looking for new destination from which to headquarter selves

The Lebanese newspaper Al-Akhbar, affiliated with Hezbollah, reported on Friday that the head of the Hamas political bureau, Khaled Mashaal, had agreed to the idea that he and senior Hamas officials living in Qatar would move elsewhere. Possibilities include Tehran, Beirut and Khartoum.

According to the newspaper, the capital of Sudan has the best chance of being selected as the new home of the leadership of the Islamist movement. Discussion on the issue is already taking place among Hezbollah leaders, despite disagreements on the subject.

Mashaal, head of Hamas' political bureau, left Damascus in February 2012. He said at the time that the situation in Syria did not allow for the movement to function, and Hamas' political leadership could not receive visitors because they refused to go to Syria. 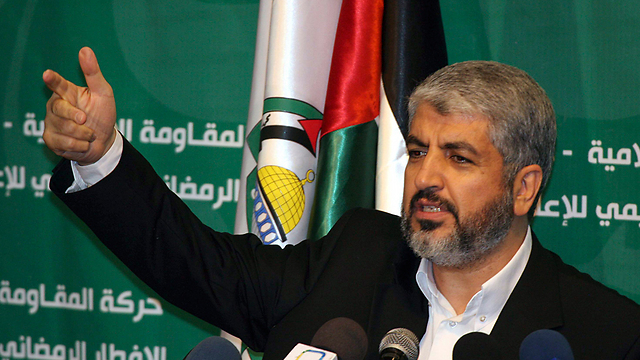 According to the newspaper, Mashaal lives in Qatar under siege-like, near house arrest conditions, and, according to his associates, has complained that he cannot move freely because of the security around him. In addition, he was told several times that travel is risky for him. He cannot give statements and cannot meet with the people he wants. According to the newspaper, the treatment Mashaal and other Hamas leaders get from Qatar is negative.

The Lebanese newspaper wrote that recently a Hamas delegation traveled to Iran to express condolences to the commander of the Quds Force Revolutionary Guards, Qassem Suleimani, after his mother died. When Suleiman met with the delegation of Palestinian factions and officials who came to comfort him, he suggested that Hamas could return to Syria if it would reassess its recently adopted position against the Assad regime. According to the newspaper, the move has already gotten underway.

In another context, sources close to Hamas said to Turkish news agency Anatolia that Mashaal is expected to give an "important speech" early next week.

At the beginning of civil war in Syria, President Bashar Assad had a few allies: Iran, Hezbollah and Hamas. But Hamas reportedly as of late has not only supported the rebels, its military wing is said to have be training personnel in east Damascus of the Free Syrian Army. The latest development that has been confirmed is that Hamas has finally separated itself from Syria – which formerly hosted its leaders – and adopted Qatar as its new patron. Now, it turns out, the search for a new home for the movement is again underway.