For first time in 30 years: US, Iranian presidents talk

US President Obama talks on phone with Iranian counterpart Rohani, after his visit to US. Israel was notified in advance, says US official

President Barack Obama said on Friday he had spoken by phone with Iranian President Hassan Rohani and both men had directed their teams to work expeditiously toward an agreement on Iran's nuclear program.

Obama said the US will coordinate closely with its allies, including Israel, which considers an Iranian nuclear weapon capability to be an existential threat. According to a US official, the US has been in touch with the Israeli government about the phone conversation.

The contact was the highest level contact between the United States and Iran since 1979, Obama noted. Obama told reporters at the White House that he had a constructive conversation with the Iranian leader. "While there will surely be important obstacles to moving forward and success is by no means guaranteed, I believe we can reach a comprehensive solution," he said.

Rohani confirmed that he talked on Friday with US President Obama and said they reiterated their commitment to solving the nuclear program issue. Rouhani, in a Twitter account believed to be genuine, said that in the conversation he told Obama "Have a Nice Day!" and Obama responded with "Thank you. Khodahafez (goodbye)." 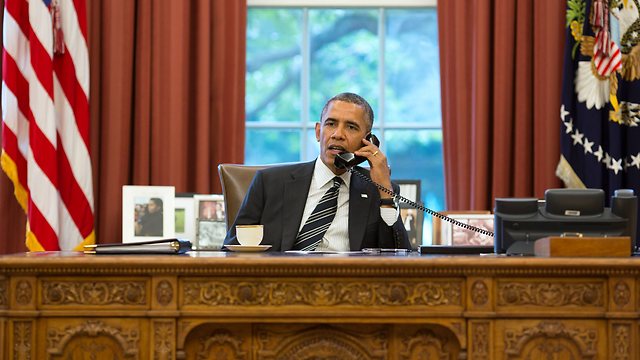 Obama on the phone with Rohani (Photo: MCT)

The two presidents "have emphasized the political will to quickly resolve the nuclear issue and pave the way to solve other issues as well as to cooperate on regional issues," announced the Iranian president's website. 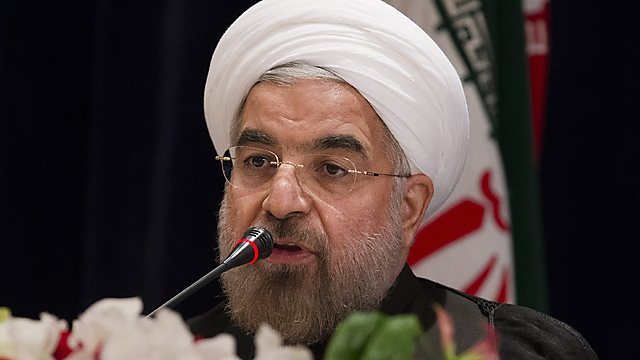 An official with the American administration said that the phone call was initiated by President Rohani, who asked to talk to Obama before leaving the US, and that the call lasted for 15 minutes.

According to him, Israel and members of Congress were notified of the talk in advanced. The official revealed some details of the content of the talk: On the outset, Obama congratulated Rohani for his election as Iran's president and for his statements during his New York visit.

Obama reiterated that an opportunity exists to solve the nuclear issue, though trust must first be established. Obama also told Rohani that a breakthrough on the nuclear issue will open the door for the relations between the countries, and also urged him to release two Americans jailed in Iran. 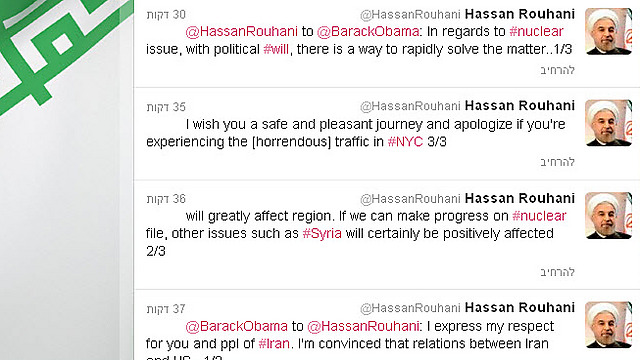 According to the official, the American president also said the Iranians must change their approach toward the internet and social media. The official added that the positive development registered between State Secretary John Kerry and his Iranian Counterpart Mohammed Javad Zarif "contributed to the atmosphere ahead of Obama and Rohani's talk today."

The official added that "the Israeli government has the right to be skeptical following Iran's statement in the past and its threats over Israel's existence. That's understandable. We say that we act for the US, Israel and the world's interests, so that Iran will not develop nuclear weapons."

The same source clarified that "we were also skeptical, and said that words must be backed up by actions."

The conversation came hours after Rohani, wrapping up a trip to the US, called the United States a "great" nation, a sharp reversal from his predecessors that buoyed hopes that the two governments can stop the escalation of tensions.

"I want it to be the case that this trip will be a first step, and a beginning for better and constructive relations with countries of the world as well as a first step for a better relationship between the two great nations of Iran and the United States of America," Rouhani told a news conference at a hotel near UN headquarters.

In a press conference held in New York hours before his flight back to Iran, Rohani congratulated Obama for his speech in the UN, which he said showed a "new environment" for Iran.

Rohani was on a charm offensive during his week in New York, repeatedly stressing Iran's desire for normal relations with Western powers and denying it wanted a nuclear arsenal, while urging an end to sanctions that are crippling its economy.

In his speech to the 193-nation UN General Assembly on Tuesday, Obama cautiously embraced Rohani's gestures as the basis for a possible nuclear deal and challenged him to demonstrate his sincerity.

However, the failure to orchestrate a handshake between the two leaders that day, apparently because of Rohani's concerns about a backlash from hardliners at home - and perhaps Obama's concerns about the possibility of a failed overture - seemed to underscore how hard it may be to make diplomatic progress.

Rohani, who took office last month, told a news conference earlier on Friday he hoped talks with the United States and five other major powers "will yield, in a short period of time, tangible results," on a nuclear deal. But he was less specific than he had been on Tuesday about the time scale.

He said Iran would bring a plan to resolve the decade-long dispute over Tehran's nuclear program, which Western powers and their allies suspect is aimed at developing an atomic weapons capability, to an October meeting with the six powers in Geneva.