Dr. Mohamed Helmy worked together with German Frieda Szturmann to save four family members during Holocaust

Yad Vashem has honored Dr. Mohamed Helmy and Frieda Szturmann as Righteous Among the Nations. According to Yad Vashem's statement, Helmy, an Egyptian physician living in Berlin during World War II who passed away in 1982, is the first Arab to be given this honor. Helmy worked together with Szturmann, who passed away as well, in the heart of Nazi Germany in order to save the lives of a Jewish family during the Holocaust. Yad Vashem is currently working on contacting both their families.

Helmy was born in Khartoum in 1901 to Egyptian parents. He arrived in Berlin at the age of 21 to study medicine. After graduating, he worked as an assistant at a local hospital and was much admired by his fellow surgeons. Since he was not Aryan, he was considered, according to Nazi racial policies, as Hamitic (descendant of Ham, the second son of biblical Noah) and his professional progress was halted. 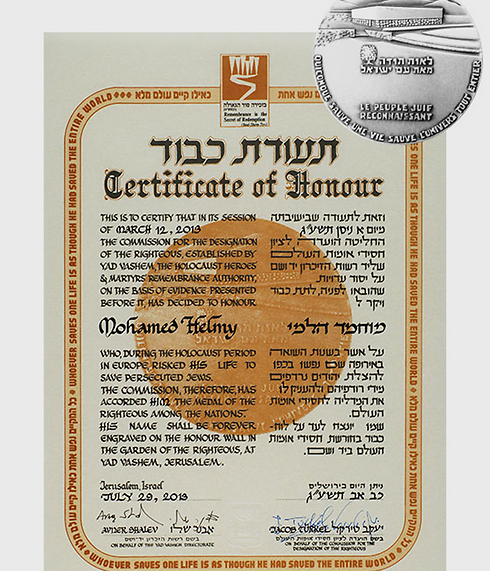 This fact, together with his unconcealed criticism of the Nazi regime, became known to the Gestapo and in 1937 he was fired from the hospital, banned from working at any public facility, and even banned from marrying his German fiancé. In 1939, Helmy was arrested together with several other Egyptian citizens, but was released after a year due to health concerns.

When the wave of deportation of Jews from Berlin began, 21-year-old Anna Boros Gutman, a friend of Helmy's family, needed a hiding place. He gave her shelter in a cabin he owned in Berlin's Buch Quarter, where she safely hid until the war ended. According to a research conducted by Yad Vashem, Helmy took her to safer locations at times of danger and when he was investigated by the police. "Dr. Helmy hid me in his cabin in Berlin from March 10, 1942, and until the battles ended," Gutman wrote after the war. "From 1942 and on, I did not have any contact with the outside world. The Gestapo knew that Dr. Helmy was our family physician, and they knew that he owned a cabin in Berlin-Buch. He managed to evade all their interrogations… he would bring me to friends where I would stay for several days, introducing me as his cousin from Dresden. When the danger would pass, I would return to his cabin. Everything Helmy did for me was out of the kindness of his heart and I am forever grateful to him." Helmy also hid Georg and Julie Wehr, Anna's mother and her husband from her second marriage, and her grandmother Cecilie Rudnik. He provided them with medical services, medicine and equipment, and made sure Rudnik was in hiding in Szturmann's home. The latter hid the grandmother in her home for over a year and shared the limited food portions with her. One of the greatest moments of danger occurred in 1944, when the Wehrs were caught, and revealed in their investigation that Helmy aided them and was hiding Anna. Helmy immediately took Anna to Szturmann's home and miraculously evaded punishment. The two saved the four family members, who immigrated to the United States after the war. In the 1950s and 1960s, they sent heartfelt letters of thanks to the Berlin Senate in which they wrote about the work of their rescuers. These letters were found in an archive in Berlin and were recently given to the department of the Righteous Among the Nations at Yad Vashem.

Helmy stayed in Berlin, married his fiancé and passed away in 1982. Szturmann passed away twenty years earlier.