The words "Allahu Akbar" were sprayed in Arabic on Monday in an IDF paratrooper memorial in the Sheikh Jarrah neighborhood in east Jerusalem.

Police launched an investigation, following several leads. Police noted that that early morning Sunday two Jewish minors were arrested under suspicion of damaging eight vehicles belonging to Arabs in the neighborhood. Police stated that Monday's vandalism could be vendetta for the vehicles being damaged.

Eli Ben-Shem, chairman of an organization supporting families of fallen soldiers Yad Labanim, responded: "In this last week alone two memorials were defaced, and it seems this time as well the background is nationalistic. This should be a warning sign for all of us. 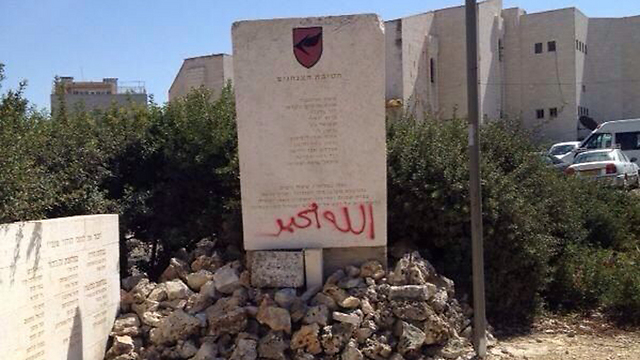 "The tense atmosphere in the Gaza Strip and in Jerusalem is mounting. Vandalism like this is an indication to the level of rising violence."

Ben-Shem added, "The State of Israel, and especially the police, must put an end to the repeated acts of vandalism of monuments. It is important to catch the perpetrators and punish them to the full extent of the law. We can and must do more.

"According to reports we get at Yad Labanim, dozens of memorials have been defaced in recent years, especially by metal thieves, who take, along with the material they're stealing, the memory of our children. We must put a stop to this contemptible phenomenon."