Prime minister addresses UN General Assembly, says that if forced, Israel would defend itself by itself. Stresses does not believe Iranian president. Urges sanctions on Iran fortify

NEW YORK – Addressing the UN General Assembly, Prime Minister Benjamin Netanyahu said: "Ahmadinejad was a wolf in wolf's clothing, Rohani is a wolf in sheep's clothing. A wolf who thinks he can pull the wool over the eyes of the international community, but like everyone else, I wish we could believe Rohani's words, but we must focus on Iran's actions," Netanyahu said.

He noted that the only way to peacefully stop Iran from developing nuclear weapons is to combine tough sanctions with a credible military threat and that if the State of Israel were forced to stand alone against Iran "it will stand alone."

The prime minister noted he wished he could believe Iranian President Hassan Rohani, but does not. "Presidents of Iran have come and gone, but they've all served that same unforgiving creed, that creed that is espoused and enforced by the real power, Ayatollah Khomeini and today, Khamenei," he said.

"Don't let up the pressure (on Iran)," Netanyahu told the UN General Assembly, adding that the only deal that could be made with Iran's Rohani was one that "fully dismantles Iran's nuclear weapons program."

The prime minister said the threat of a nuclear Iran posed a risk to the State of Israel: "We are an ancient people, we date back nearly 4,000 years. We've overcome adversity, and established a state in our ancestral homeland. Today our hope for a future is challenged by a nuclear Iran." 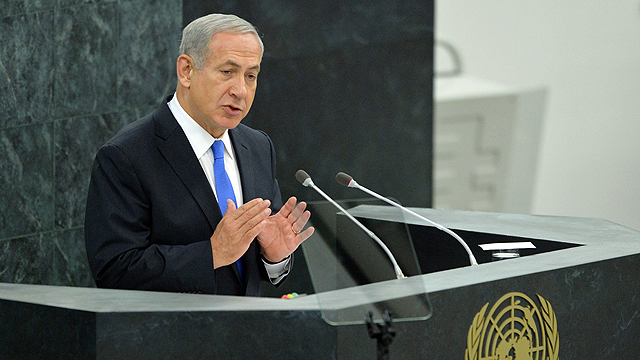 Netanyahu urged the world not to agree to a partial deal with Iran that does not see its entire nuclear appartus dismantled.

Minister Gilad Erdan, in New York with the prime minister's entourage told Ynet: "We must stand guard, and that's the prime minister's job. We will continue to let the world know the information we have on Iran. The International Atomic Energy Agency is also monitoring the events."

The minister added that "as the military threat is leading to Assad's disarming of chemical weapon, so will such a threat be able to bring about Iran's disarming."

Also in New York, Deputy Defense Minister Danny Danon added that "Netanyahu did not change Israel's policy. We do not believe Iran; we're keeping the military option open." He stressed that the prime minister's goal was to keep the issue of nuclear Iran on the international community's agenda.

As Washington and Tehran seek detente, Israel and the United States remain divided over the Iranian nuclear issue, commentators say, despite efforts to play down their differences.

Washington has long insisted on sanctions and diplomatic efforts to pressure Tehran over its atomic program, which the West and Israel allege is aimed at producing a nuclear bomb and which Iran denies.

For its part, Israel has repeatedly advocated military force and has threatened unilateral strikes against the Islamic republic.

On Monday, US President Barack Obama met Prime Minister Netanyahu at the White House, and said military force was still an option.

And Netanyahu suggested that, for now, he accepted US diplomatic efforts with Iran.

The White House meeting came only days after Obama's historic telephone conversation with Iranian President Hassan Rohani spurred hopes for a breakthrough in the 30-year estrangement between Washington and Tehran.

But Monday's seemingly reassuring dialogue belied acute differences between the United States and Israel over how to approach an Iran that has been reaching out to the Western world, observers said.