A guide to Egyptian students: No tights and flip-flops

The Muslim Brotherhood may be out of power, but its conservative spirit remains: Egypt, which opened its academic school year last week, is finding students flustered – not due to the stirring political status, but rather due to a new, strict dress code enforced at universities.

According to Arab media outlets, many universities in Egypt, including Helwan University, Ain Shams University and Cairo University – all in the Egyptian capital – are forbidding their students from arriving to campus in shorts and flip flops. Female students have been instructed to not wear tight pants to school.

The Vice President of Student Affairs at Ain Shams University, Mohammad Al-Touchi, explained even before the school year commenced that the new dress code is meant to maintain the honor of the university. "It's not normal that a student will walk into campus wearing shorts and flip-flops; each place has its conditions," he said. "When you go to Friday prayers at the Mosque, you'd usually wear the traditional clothing."

The University's President, Dr. Hussein Issa, was not as assertive, saying no student will be forced to wear clothing they do not wish to wear. However, he said, "there are traditions and codes of conduct and each student must wear clothes that honor the sanctity of the campus regardless of any official decision made by the university."

Official or not, students are rising up against the code. One student opened a Facebook event calling his peers to wear the "forbidden" clothes to school. The event page reads: "The rising of students in Egypt. We will go down to the university on Sunday in short pants and tights."

Hundreds of people joined the page, and the creator of the event said, "No one has a right to tell me what to wear or not to wear. Go and cleanse the University of its administrative, financial and educational corruption first. Take for example the unsubsidized study books: they can cost up to 100 Egyptian pounds. I have a right to wear anything I want: shorts, tights, pants, a galabiya, or a dress. I'm free to wear what I want." 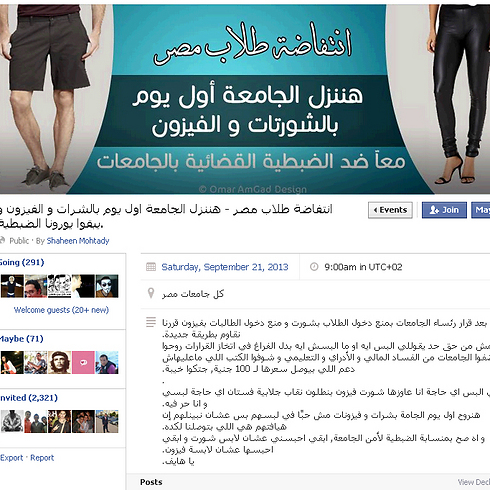 Facebook protest page against dress code
The initiative against the university received many enthusiastic responses, such as, "I never wore tights before, but now I will." In the meanwhile, it seems the University authorities are having a hard time applying their own rules. One of the staff members in Cairo University said that students wear "modest" clothes over more exposing wear, and take off the outfits after they enter the campus. The paper Al-Youm Al-Sabe reported that in recent days a student tried to enter Ain Shams University wearing shorts and was arrested by security and denied entrance. An argument ensued and the student eventually did enter the school, while supporters of the dress code and students claiming they are free to dress as they please argued. Politics has, of course, managed to find its way to this issue. Several Egyptian universities forbade students from arriving to campus wearing yellow shirts affiliated with Muslim Brotherhood supporters in Rabaa al-Adawiya in Cairo.