Palestinians return to land of Homesh after 35 years

Eight years after it was evacuated as part of the pullout, dozens of residents of the village Burqa, near the West Bank city of Nablus, arrived Thursday to work the land of the former settlement Homesh. They waved Palestinian flags and erased some of the Hebrew writings left in the area.

In 1978, a military seize warrant was issued for the lands of the West Bank, and two years later, the settlement of Homesh was built. In 2002, a closed zone order was issued on the settlement, determining that Palestinians were barred from the land, and the warrant remained valid even after the pullout.

Three years ago, the Yesh Din organization appealed to the High Court in an attempt to annul the closed zone order, and in June the State indeed ordered to cancel it, three months later ordering to annul the seize warrant as well. 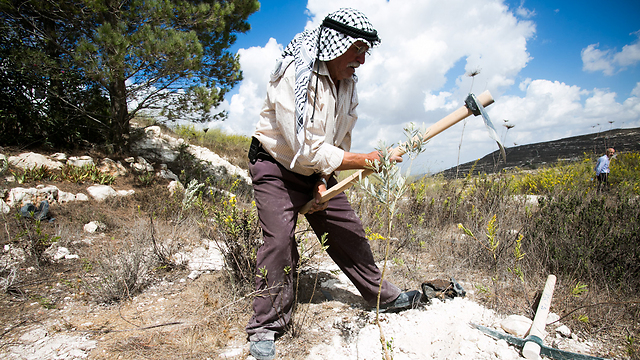 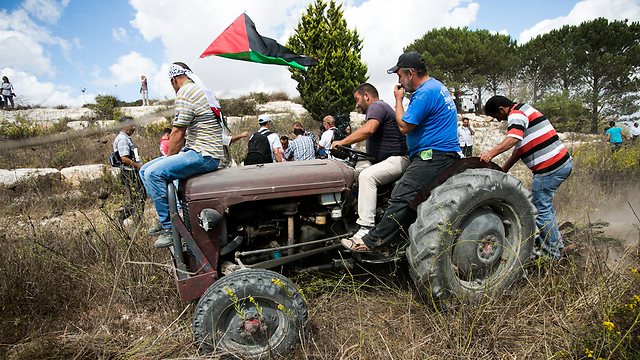 Palestinians in the former settlement of Homesh (Photo: Yesh Din)

The head of the Burqa council, Jihad Salah, told Ynet that dozens of the village's residents arrived at the location, escorted by Nablus Governor Jibrin Bakri, and started working the land with tractors and planting seeds.

"This is a historical day for us, to return to the lands they kept us away from for 35 years, everyone here was happy," he said. "Since this land is defined as Area C, we can't build homes here."

Salah mentioned that though the Palestinians are worried settlers will try to return to the land, there will be no security personnel at the location. "The ones who should prevent settlers from arriving are the army, and we hope that that will be the case," he said.