Group of yeshiva students aged 13-16 are suspected of torching vehicles, throwing stones at Arabs. Boys say they acted out of 'hatred for Arabs, revenge for attacks committed against Jews'

In recent weeks, investigators of the Jerusalem District Police Central Unit arrested 14 Jewish boys from Jerusalem, aged 13-16, who study in different yeshivas across the country, on suspicion of operating as an organized group that attacked Arabs, vandalized vehicles, spray-painted hate graffiti and threw stones at vehicles with Arab drivers. Their arrest was cleared for publication on Sunday.

According to the police, the teens testified that in recent months, they acted out of "hatred for Arabs and revenge for attacks committed against Jews," such as the stabbing of a Jewish man in the vicinity of Damascus Gate a few weeks ago.

Police claim that the boys encouraged each other to attack Arabs, and that the events took place during the High Holidays break, when the boys returned home from their yeshivas, as well as during the summer vacation. The remand of all the suspects was extended, apart from four who were released on special conditions due to their young age of 13.

The investigation began after a resident of Sheikh Jarrah called the police when the teens were damaging vehicles in the neighborhood. Policemen and volunteers apprehended the two who were involved in the act and they were brought to questioning. Following the event, additional suspects were arrested. The detainees lightly damaged eight Arab cars in the city by scratching the paint. 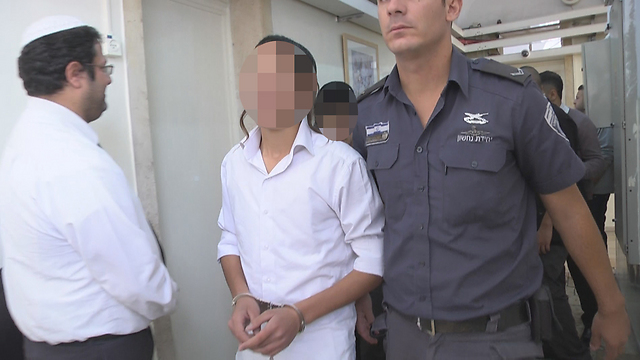 One of the suspects in Jerusalem court (Photo: Eli Mandelbaum) 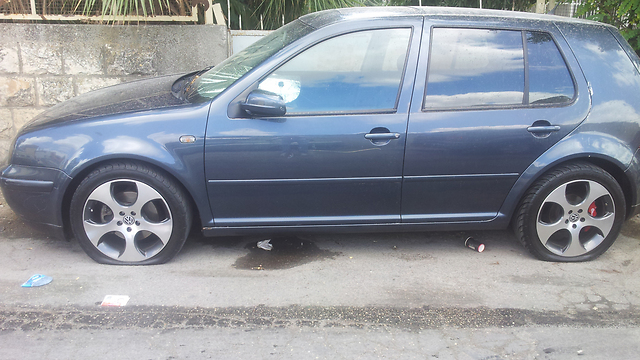 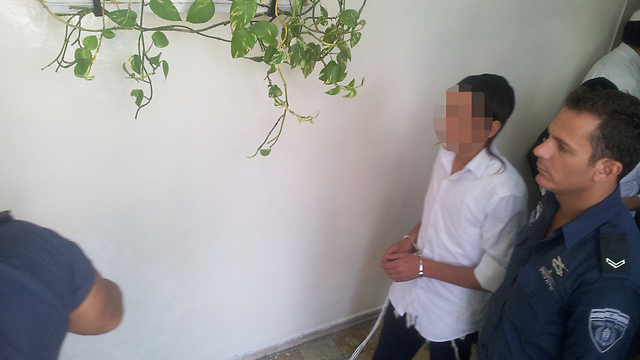 One of the boys in court (Photo: Noam Dvir)
The teens admitted in their investigation that in recent months, they attacked several Arab drivers who drove on Route 1 (Jerusalem-Tel Aviv), threw stones towards Egged buses in which they noted there was an Arab driver, torched vehicles that belong to an Arab resident of Sheikh Jarrah, threw stones towards Arabs and slashed tires of Arab-owned vehicles. They further added in their investigation that the attacks and throwing of stones were committed after they conducted observations in the streets where they spotted Arab drivers and pedestrians. When Arabs stopped at a red light, they boys would signal to their friends, who would throw stones at them, open their car doors and spit at them or attack them. So far, 20 instances were documented by the police, and the investigation continues. The police suspect that the teenagers are involved in other similar cases. Apart for one of the suspects, all detainees confessed to the acts. "We know of several other incidents and are currently trying to locate the victims in order for them to file a complaint," said a source in the police. Attorney Itamar Ben Gvir, who represents one of the boys, said: "The police have excess motivation. They tried to extend his remand by a few extra days but the court turned them down. I am not sure that the evidence will be admissible in court, they use investigation tricks on 16-year-old kids."

'It would have been different if they were Arabs'

East Jerusalem residents responded with skepticism and wariness to the arrests. "If it ends without a conviction they'll be encouraged and will understand that the police closes such cases," Attorney Amad Amhasin, a resident of Sheikh Jarrah, told Ynet.

Amhassin added: "If the teens will not be convicted and punished then all these arrests are worth nothing. My car was also damaged and my two kids were sprayed with tear gas. They did the same to my neighbors. Now the kids are scared to play outside, because they are threatened by the haredim who pass by every day and harass us.

"I have to take them to school myself and bring them back; they really start to feel like they're in prison. It cannot be that the police haven't the resources to fight this phenomenon. We're being discounted, as if we don’t exist."

Despite the arrests, Mohamed Amhisan, another Sheikh Jarrah resident, has little faith in the authorities. "All the arrests are just for show, so they'll be able to tell us the police are doing their duty. But 'price tag' acts are still spreading in East Jerusalem and no one seems able to stop the gang that's behind them.

"If it was an Arab who abused Jews they'd bring him to trial in a few hours, and he would have been severely punished," he added bitterly.

"I'm sure we'll see more 'price tag' acts. The Israeli government, instead of helping us, watch the results as if it's a TV movie. Their silence and releasing the suspects will give a green light for the racists to continue, until a disaster occurs, one for which we'll all pay the price."

Jerusalem was the scene of several different violent events against both Jews and Arabs lately. Last week, cars were vandalized in the Old City, and "price tag" graffiti was sprayed on the nearby wall. Tareq, an Arab whose vehicle was vandalized told Ynet: "Near us there are people I define as 'crazy settlers' who are committing terror here." His neighbor Amjad said, "There are young (Jewish) religious kids who cause trouble here. We tried talking to the rabbis in the area, but it didn't work out. No one cares. Eventually we will have to catch them and there will be violence."

Four people aged 17-26 were arrested late September while smashing 15 gravestones in a Christian cemetery in Jerusalem. The week before, cars belonging to Sheikh Jarah residents were vandalized, in the vicinity of a Red Cross building. One of the vehicles was also "price tagged" and two others were sprayed with black paint. The event took place a day after the kidnapping and murder of IDF soldier Tomer Hazan.