Rabbi Yosef anesthetized, on respirator due to troubled breathing

After reporting slight deterioration in rabbi's condition, doctors forced to fully sedate him again due to 'increased respiratory troubles'

Spokesperson for the Hadassah Ein Kerem Hospital in Jerusalem Raheli Goldblatt said the team of doctors treating Rabbi Ovadia Yosef decided to put him back on a respirator and under full anesthesia due to increased respiratory troubles.

Prof. Dan Gilon, the cardiologist in charge of Yosef, told Ynet there is no immediate danger to the rabbi's life. According to him, sedating the rabbi and putting him on a respirator again, after his body became tired, "is not unexpected."

Earlier, Gilon said that a minor deterioration in his patient's condition has been registered, curbing the improvement noted over the last few days. 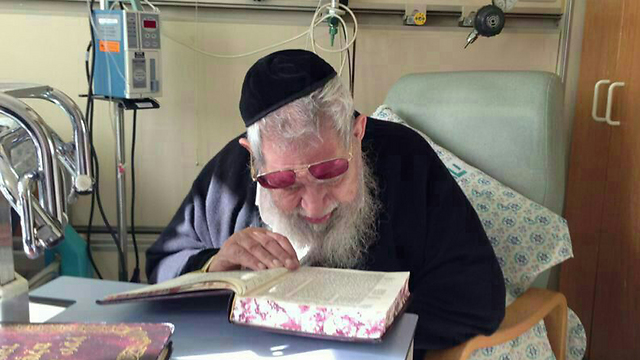 According to Gilon, the rabbi's condition continues to be serious but stable, and he suffers from an infection and receiving medication.

The rabbi's son, Rabbi David Yosef, said that in the last few days his father "suffered terrible pains and was tormented in an indescribable fashion." According to him, the medical treatment did not help: "Not only was the improvement halted, but his condition deteriorated."

The haredi radio station Kol BaRama, affiliated with the Shas party, updated that Rabbi Yosef will undergo on Monday "a complex operation." Shas Chairman MK Aryeh Deri said that the rabbi's medical condition is like it was last week, though this was not confirmed by the hospital.

Shas' Maayan Hinuch Torani network stated that on 12 pm Monday a mass children's prayer will be held at the Western Wall plaza in Jerusalem.

This latest deterioration in Shas' spiritual leader's condition followed his regaining full consciousness on Wednesday. Prof. Gilon stressed at the time that his life is still in danger, though it has lessened. "Though he sleeps a lot, he is fully conscious," he said on Wednesday.

The rabbi has been hospitalized for the last three weeks, since he was fitted with a pacemaker.