At Bar-Ilan University, PM says Israel, US see eye-to-eye on need to prevent nuclear Iran. 'If they want peace, they will agree to dismantle nuke program, he says. Adds: Occupation did not create conflict

"Iran's goal is to take over the entire Middle East and beyond, and destroy the State of Israel. This is not speculation, this is the goal," Prime Minister Benjamin Netanyahu said Sunday evening.

Speaking at Bar-Ilan University's Begin-Sadat Center for Strategic Studies, Netanyahu said that the Iranian nuclear program is not intended for peaceful purposes, adding that Israel and the United States see eye-to-eye on the need to prevent Iran from arming itself with nuclear weapons.

"I do not believe (Iranian) President Hassan Rohani is interested in (nuclear capability) for civilian purposes. We should ask why they insist on centrifuges for the enrichment of uranium. There is no need for them (in a peaceful nuclear program)," the Israeli leader said.

Netanyahu said the international community should seek a diplomatic solution to the nuclear stand-off, "but only one that will prevent the Iranians from obtaining nuclear weapons." The PM called on the West not to let up the pressure on Iran and even add economic sanctions on the Islamic Republic.

Addressing the Mideast conflict, the PM dismissed claims that Israel’s occupation of the West Bank in 1967 stood at the heart of the conflict, stating instead that as long as the Palestinians do not recognize the Jewish state’s right to exist, there will not be peace. 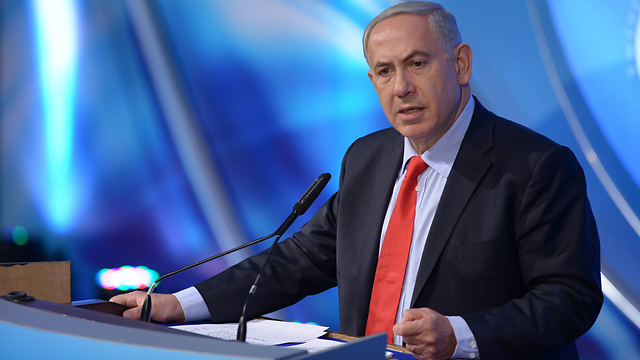 “In order for the process, in which we find ourselves, to be significant… in order for it to have a real chance of success, it’s necessary to hear the Palestinian leadership finally say that it recognizes the right of the Jewish people to a state of its own, which is the state of Israel,” he said.

“I hope that it shall be so, so that we can advance a real solution to the conflict,” continued Netanyahu.

According to Netanyahu, the occupation did not create the conflict. "For me it started in 1921, the day the Arabs attacked Beit Haolim in Jaffa."

"My own grandfather had arrived at Jaffa, to the same house, one year earlier," said Netanyahu. "This attack was not against territories or settlements," he noted. "It was against the immigration of Jews to the Land of Israel."

Netanyahu also called for Palestinians to give up on their demand for the return of refugees to areas now inside Israel, and said any agreement would need to address Israel’s security needs.

“The Palestinians must abandon their right of return,” he said. “After generations of incitement, we have no confidence that recognition (of Israel) will trickle down to the Palestinian people. Therefore, we need very strong security arrangements, and to go forward without blindness.”

The Israeli premier also criticized Iran for what he said were its attempts to make cynical use of the Holocaust.

Netanyahu noted that he recently heard Iran's representative “muttering half heartedly” about the crimes of the Nazis, and then going on immediately to say that the Jews must not be allowed to use the Nazi issue in order to commit crimes against the Palestinians.

The historical truth is the opposite of this presentation, the PM said.

The PM then began quoting numerous historical sources he claimed proved that the mufti of Jerusalem was “one of the initiators of the Holocaust of the Jews of Europe” and that he was constantly encouraging the Nazi leadership to annihilate the Jews, throughout the war. He cited evidence that the mufti even visited the gas chambers at Auschwitz with Adolf Eichmann.

"The mufti is still a greatly admired figure in the Palestinian national movement," said Netanyahu.

"These are the weeds that need to be uprooted," he said. "The root of the conflict is the deep resistance among a hard core of Palestinians to the right of the Jewish people to its own state in Israel."