Rabbi Ovadia Yosef's condition has deteriorated overnight and is now critical, doctors at the Hadassah Ein Kerem Hospital in Jerusalem said Monday. His life is now in "immediate danger." Family members have been called to the hospital.

A hospital spokeswoman said that the rabbi, 93, has received an additional dose of medication. Well wishers have been praying for the rabbi's health since he was last hospitalized. A mass prayer service of Shas -educated children is set to be held at the Western Wall later on Monday.

Earlier on Monday, Prof. Dan Gilon, the rabbi's cardiologist, said that the rabbi is now in greater danger than before. 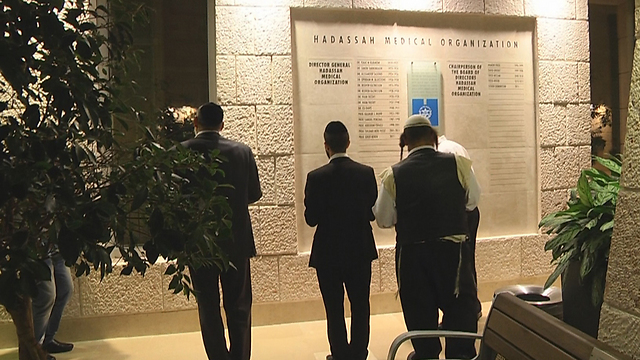 Praying for rabbi at the hospital (Photo: Eli Mandelbaum)

On Sunday, Hadassah Ein Kerem Spokeswoman Racheli Goldblatt said Rabbi Yosef has been placed under anesthesia and on a respirator machine, in view of his growing difficulty in breathing.

The rabbi's son, Rabbi David Yiosef, said Sunday that his father has been under "excruciating pain" over the past few days and that medical treatment could not alleviate his pain.

MK Eli Yishai on Monday called on Israelis to pray for the rabbi's health. "All of his life the rabbi prayed for the people of Israel and now I'm asking the people to pray for him."

Shas chairman Arieh Deri became particularly emotional during an interview with the Kol Barama radio station. Addressing the deterioration in the rabbi's condition he said, "Each and every one of us must pray now. I don't want to think what could happen, God forbid. How would the world act without the sun? how would the world act without the moon? What will become of us? Who will lead us? Who will take his place?"

Last Wednesday, the rabbi regained consciousness. He has been in hospital for the past three weeks during which he had undergone a pace-maker surgery.