A drive-by shooting killed six Egyptian soldiers east of Cairo on Monday, shortly after a massive car bombing hit the security headquarters in a town near the tourist resorts of southern Sinai, killing at least three people and wounding dozens.

The attacks came a day after dozens were killed when holiday celebrations marking the start of the 1973 Mideast war turned into deadly clashes across Egypt, though it was not immediately clear if Monday's violence was related.

A radical Muslim Salafi group had threatened in a statement last Friday that it would kill anyone who collaborated with the military's ongoing offensive against militants in northern Sinai, but neither the group -- nor any other radical factions -- claimed responsibility for any of the attacks on Monday. 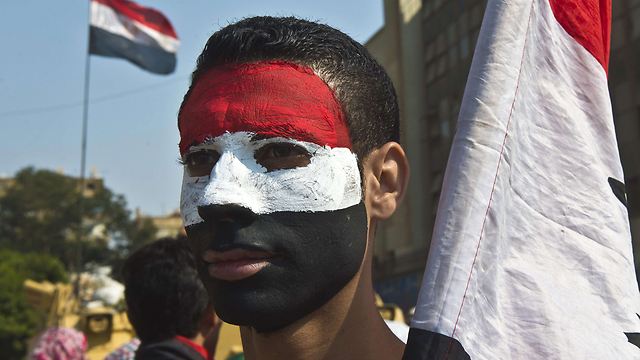 The dawn attack on the earth station in the leafy suburb of Maadi in Cairo caused only minor damage to one of the giant satellite dishes in the complex. But its significance was far wider, in part because it struck at the heart of the nation's telecommunications center, making it the most serious attack in the capital since last month's assassination attempt against the country's interior minister outside his home in eastern Cairo.

A senior security official at the site said the attack did not disrupt communications, but acknowledged its "brazen" nature.

"We are expecting worse," predicted the official, speaking on condition of anonymity because he was not authorized to speak to the media.

In the attack east of Cairo, the six soldiers, including a lieutenant, were on patrol in a pickup truck near the Suez Canal city of Ismailia when masked gunmen in another vehicle opened fire, killing all of them, said security officials, speaking on condition of anonymity because they were not authorized to talk to the media.

The southern Sinai explosion at the security headquarter in the town of el-Tor killed at least three people and wounded 55, signaling what could be the spread of attacks by Islamic militants, already active in northern Sinai.

Near-daily attacks against security forces and soldiers in the volatile northern Sinai Peninsula have increasingly resembled a full-fledged insurgency, especially in the three months since the ouster of Egypt's Islamist President Mohamed Morsi.

But the region of southern Sinai, which includes the popular diving resort of Sharm el-Sheikh, has been mostly quiet since a series of deadly attacks in 2005 and 2006.

The four-story building of the security headquarters sustained serious damage and the officials said the blast was caused by a car bomb detonated by remote control. Among the wounded was a top police commander.

Monday's attacks come a day after at least 51 people were killed in clashes across Egypt between security forces and Morsi's supporters. At least 40 of those killed were in Cairo, where some neighborhoods saw hours of pitched street battles between police and protesters. The fighting left streets looking like combat zones, with fires burning, black smoke rising and the air thick with tear gas.

Sunday's death toll and Monday's attacks constituted the latest chapter in the turmoil roiling Egypt since the ouster in February 2011 of autocrat Hosni Mubarak.

The latest violence is certain to set back efforts by the interim, military-backed government to revive the economy, especially the vital tourism sector, and bring order to the streets of Cairo, where crime and lawlessness have been rife.

Morsi was Egypt's first civilian and first freely elected president, succeeding four since the early 1950s who hailed from a military background. But after a year in office, Morsi was faced by massive protests demanding his ouster, accusing his Muslim Brotherhood of taking over power -- and on July 3, military chief Gen. Abdel-Fattah el-Sissi removed him.

The military is now back as the real source of power in Egypt, and state and independent media have been depicting it as the country's savior -- with growing calls for el-Sissi to run in the presidential election due early next year.

The government has since the popularly backed coup detained at least 2,000 Brotherhood members, including most of the group's leaders. It says the detainees would face trial on charges that range from murder and inciting violence to abuse of power and conspiring with foreign powers.

But Islamic radicals, at least in Sinai, are determined to exact revenge.

"To all who are dealing with the army forces, forwarding information to them or spying for their account ... we tell them: 'You are taking part in a war against Islam and Muslims, and you are fighting God and his Prophet'," said the Salafiyah Jihadiya group in its statement, posted on militant Web sites.