Nobel laureate: We left because Warshel didn't get tenure in Israel

Wednesday's announcement of the Nobel Prize in chemistry winners, among them two Israeli-Americans, has thrown Israel's brain-drain problem into sharp relief.

New Nobel laureate Prof. Michael Levitt's response to the question why did he prefer to continue his breakthrough research abroad is matter-of-fact: "Because (fellow Nobel laureate Arieh) Warshel didn't get tenured there (in Israel) and it was critical in those years of work," Levitt answered simply.

Levitt's home phone rang at 2:10 am (California time). "I didn’t exactly answer and then I did and that was it – then they announced, the committee announced and I was very glad to hear it." 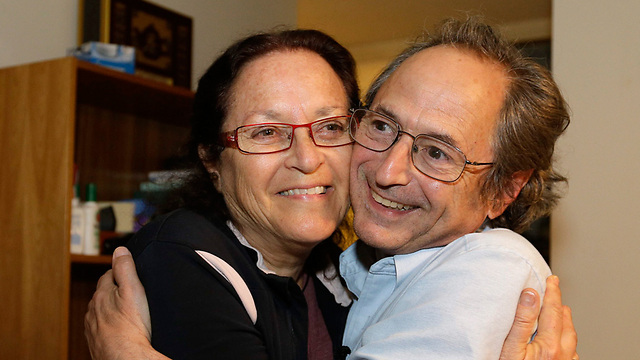 "There are people who make an effort to get the Nobel Prize. I didn't do anything. I have friends in Sweden but I wasn't looking for this," Levitt told Ynet from his California home. "At first it's a shock, and then you try to wrap your head around it, and then the Stanford University president arrives and everyone simply abducts you. The president went in and asked where the champagne is. I don't have any, so we drank white wine."
X

According to him, "I feel the need to talk to everyone and thank them. As a scientist I'm supported by tax-payers and I owe them. Everything I do at work is great fun. Most of the time it's like a children's game. The job-satisfaction is indescribable, and contrary to most scientists who turned into managers, I keep working like a student. It's what interests me the most - to keep working."

At the start of the road, Levitt recalled, "we worked under the Israeli scientist Shneor Lipson. He was  Warshel's doctorate instructor. I arrived in Israel in '67 and everyone thought I was a volunteer. I came for a year, since I didn't have an opening for a doctorate in Cambridge. They suggested I go to Israel to study with Lipson and come back the next year." That's how he met Rina. The two got married and had three children, two of whom now live in Israel and the third in the US. "Rina spends most of the time in Israel with the kids and I wander on the San-Francisco-Israel line. Truth is, I've no problem sitting in an airplane for many hours. I have good concentration, I open a laptop and can write programs or articles." Regarding his relationship with fellow laureate Arieh Warshel, Levitt said: "Arieh and I have been friends and colleagues for a long time. My best articles were written with Arieh."

Winning the prize, he added, changed some of his plans. "I planned to travel to Patagonia with my wife. We'll have to go to Sweden instead," he said.

"The Nobel is recognition and it's fun to get it, and it's good for the university, it's good for Israel and it's good for our science. For many years we felt we were sidelined, but I want my life to continue on the same course – a loving wife, children, work and travel. That's what I want to do with my life."

Levitt and Warshel will be sharing the prize with Professor Martin Karplus, a Harvard professor whose eldest daughter, Dr. Rivka Karplus, is a Jerusalem-based physician.

Though the Karplus family returned to the US six months later, Rivka immigrated to Israel in 1985. She noted Wednesday that she had heard about her father's win on the radio before she noticed he had emailed her the joyous news.