While Iranian President Hassan Rohani tries to ease friction with the United States, chants of "death to America" on Friday may deepen doubts in the West that Tehran is ready for a deal as talks on its nuclear program resume next week.

Former president Akbar Hashemi Rafsanjani, a prominent Rohani backer, said earlier this month that he saw no value in chants calling for death to countries or individuals. 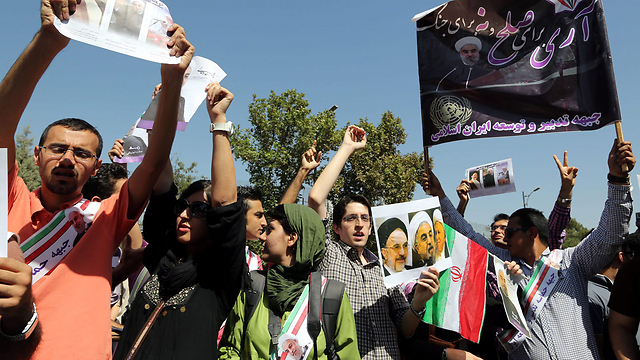 An editorial in a moderate newspaper argued that it was time for the habitual chants of "death to America" to go the same way as the slogans of "death to the Soviet Union" and "death to China" which were abandoned shortly after the revolution.

"During the last 35 years has this evil become less or more? If yesterday in the arena of conspiracies against Iran, American was a snake, it is now a poisonous serpent. Any conspiracy that is directed against Iran stems from America," Fars news agency quoted him as saying.

"According to this logic we say death to America. And Americans .... should know that this slogan is the secret of Iran's resistance and for as long as there is American evil, this slogan will endure across the nation of Iran."

It also won him the guarded support of Supreme Leader Ayatollah Ali Khamenei, the most important power centre in Iran.

But conservative hardliners in the Islamic Republic's complex political establishment have picked up on reservations expressed by Khamenei and begun a rearguard campaign to put the brakes on Rohani's diplomatic opening.

Debate has mounted inside Iran on the speed and extent to which the Islamic Republic should attempt to patch up its many quarrels with the West, and the United States in particular.

Rohani's visit to the United Nations last month was capped by a telephone call from US President Barack Obama, the first time the presidents of the two nations had spoken directly since the 1979 Islamic Revolution toppled the US-backed shah.