A massive, powerful cyclone packing heavy rains and destructive winds slammed into India's eastern coastline Saturday evening, as hundreds of thousands of residents moved inland to shelters in hopes of riding out the dangerous storm.

Roads were all but empty as high waves lashed the coastline of Orissa state, which will bear the brunt of Cyclone Phailin. By midafternoon, wind gusts were so strong that they could blow over grown men. Seawater pushed inland, swamping villages where many people survive as subsistence farmers in mud and thatch huts.

As the cyclone swept across the Bay of Bengal toward the Indian coast, it killed at least five. Satellite images showed its spinning tails covering an area larger than France. Images appeared to show the storm making landfall early Saturday night.

In Behrampur, a town about 10 kilometers (7 miles) inland from where the eye of the storm hit, the sky blackened quickly around the time of landfall, with heavy winds and rains pelting the empty streets.

"My parents have been calling me regularly ... they are worried," said Hemant Pati, 27, who was holed up in a Behrampur hotel with 15 other people from the coastal town hit first by the storm.

The hotel manager said he would bar the doors against anyone trying to enter, saying there would be food, water and electricity from generators only for guests of the Hotel Jyoti Residency. "Nobody can come inside, and nobody can go out," Shaik Nisaruddin said. 'Nothing to stop it at this point' (Photo: AFP)

Estimates of the storm's power had dropped slightly, with the US Navy's Joint Typhoon Warning Center in Hawaii showing maximum sustained winds of about 222 kilometers per hour (138 miles per hour), with gusts up to 268 kph (167 mph).

The storm, though, remained exceedingly strong and dangerous. A few hours before it hit land, the eye of the storm collapsed, spreading the hurricane force winds out over a larger area and giving it a "bigger damage footprint," said Jeff Masters, meteorology director at the US-based private Weather Underground. 'You don't get storms stronger than this' (Photo: AFP) 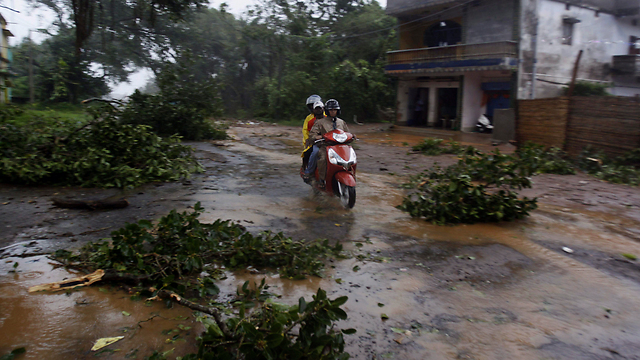 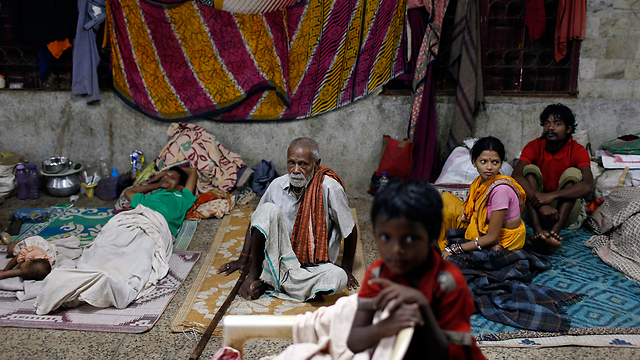 People taking shelter in India (Photo: Reuters)
It's probably a bad thing it was doing this when it made landfall. Much of the housing in India is unable to withstand even a much weaker hurricane," Masters said. He also said coasts would not be alone in suffering heavy damage. "This is a remarkably strong storm. It's going to carry hurricane-force winds inland for about 12 hours, which is quite unusual," Masters said. Hurricanes typically lose much of their force when they hit land, where there is less heat-trapping moisture feeding energy into the storm. With some of the world's warmest waters, the Indian Ocean is considered a cyclone hot spot, and some of the deadliest storms in recent history have come through the Bay of Bengal, including a 1999 cyclone that also hit Orissa and killed 10,000 people. By Friday evening, some 420,000 people had been moved to higher ground or shelters in Orissa, and 100,000 more in neighboring Andhra Pradesh, said Indian Home Secretary Anil Goswami. L.S. Rathore, the head of the Indian Meteorological Department, predicted a storm surge of 3-3.5 meters (10-11.5 feet), but several US experts had predicted a much higher wall of water would blast ashore. Meteorologist Ryan Maue of the private US weather firm Weather Bell said that, even in the best-case scenario, there would be a surge of 7-9 meters (20-30 feet). A storm surge is the big killer in such storms, though heavy rains are likely to compound the destruction. The Indian government said some 12 million people would be affected by the storm, including millions living far from the coast. There were few reports coming out of Orissa in the first hours after the storm's landfall. Phailin had already been large and powerful for nearly 36 hours, with winds that had built up a tremendous amount of surge, Maue said. "A storm this large can't peter out that fast," he said. The 1999 cyclone – similar in strength to Phailin but covering a smaller area – threw out a 5.9-meter (19.4-foot) storm surge.

Several hours before the storm hit, about 200 villagers were jammed into a two-room, concrete schoolhouse in the village of Subalaya, about 30 kilometers (20 miles) from the coast, while local emergency officials distributed food and water. The roads were almost empty, except for two trucks bringing more evacuees to the school. Children shivered in the rain as they stepped down from the vehicles, following women carrying bags jammed with possessions. 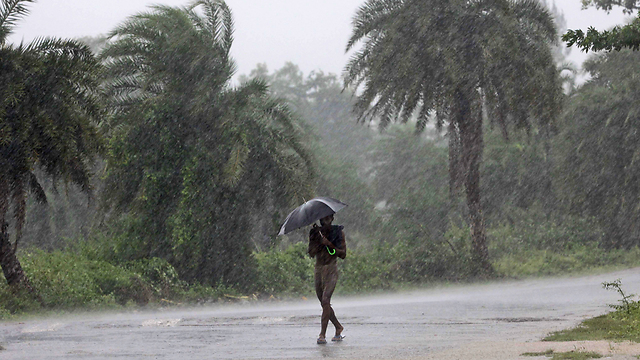 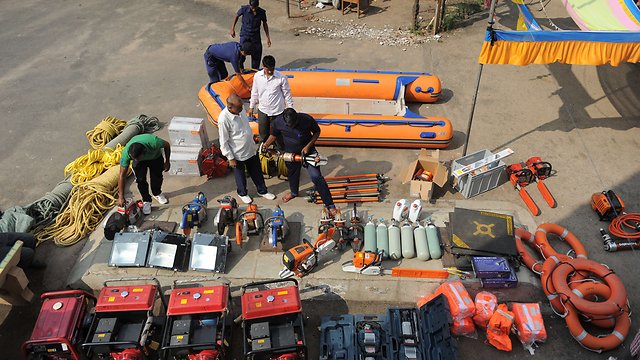 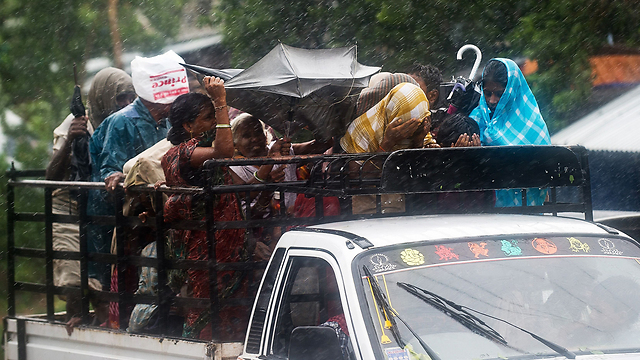 Photo: AFP
Many had fled low-lying villages for the shelter, but some left behind relatives who feared the storm could wipe out lifetimes of work. "My son had to stay back with his wife because of the cattle and belongings," said 70-year-old Kaushalya Jena, weeping in fear inside the makeshift shelter. "I don't know if they are safe." In Bhubaneshwar, the Orissa state capital, government workers and volunteers were putting together hundreds of thousands of food packages for relief camps. Stranded tourists who had come for Orissa's beaches and temples instead roamed the hallways of boarded-up hotels. "It seemed strange, because it was a beautiful sunny day yesterday," said Doris Lang of Honolulu, who was with a friend in the seaside temple town of Puri when news of the cyclone's approach reached them. The state's top official, Chief Minister Naveen Patnaik, appealed for calm. "I request everyone to not panic. Please assist the government. Everyone from the village to the state headquarters have been put on alert," he told reporters. Surya Narayan Patro, the state's top disaster management official, had said that "no one will be allowed to stay in mud and thatched houses in the coastal areas" when the storm hits. By Saturday afternoon, the sea had already pushed inland as much as 40 meters (130 feet) along parts of the coastline. Officials in both Orissa and Andhra Pradesh have been stockpiling emergency food supplies and setting up shelters. The Indian military has put some of its forces on alert, and has trucks, transport planes and helicopters at the ready for relief operations. The storm is expected to cause large-scale power and communications outages and shut down road and rail links, officials said. It's also expected to cause extensive damage to crops. In the port city of Paradip -- which was hammered in the 1999 cyclone, also in October -- at least seven ships were moved out to sea to ride out the storm, with other boats shifted to safer parts of the harbor, officials said. US forecasters had repeatedly warned that Phailin would be immense. "If it's not a record, it's really, really close," University of Miami hurricane researcher Brian McNoldy told The Associated Press. "You really don't get storms stronger than this anywhere in the world ever." To compare it to killer US storms, McNoldy said Phailin is nearly the size of Hurricane Katrina, which killed 1,200 people in 2005 and caused devastating flooding in New Orleans, but also has the wind power of 1992's Hurricane Andrew, which packed 265 kph (165 mph) winds at landfall in Miami. India experiences two cyclone seasons a year, one in May before the annual monsoon rains and another beginning in October. "Keep in mind, India's second cyclone season is only just beginning," said Masters, the American meteorologist. "We could see another big storm in October or November."

The 1999 Orissa cyclone, which was similar in strength to Phailin, killed 10,000 people.