The haredi draft, Governance Bill and the Referendum Bill are the parliamentary powder kegs lying under what is expected to be an exceptionally tense winter session, as 19the Knesset reconvened after its break on Monday evening in Jerusalem.

Shortly before the session started, Deputy Foreign Minister Zeev Elkin estimated in a burst of possible pessimism that "this coalition, like all its predecessors, will not survive. Every coalition has a breaking point."

Speaking from the podium, Prime Minister Benjamin Netanyahu discussed on developments in the Mideast, and focused on Iran and its nuclear program.

"Iran's economy is close to a breaking point. Despite the pressure, the Tehran regime didn't abandon its goal of developing nuclear weapons. Iran can quickly enrich uranium from 3.5% to 90%. It's willing to give little, and receive plenty. It'll be a historical mistake to ease the pressure now. Israel will not allow Iran to acquire nuclear weapons," Netanyahu said. 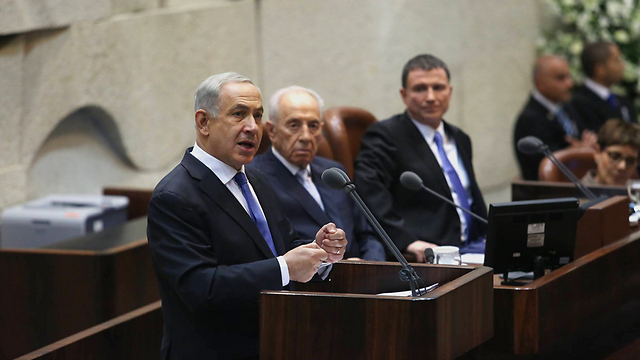 Netanyahu also took pride in buffeting the flow of African migrants into Israel. "We've blocked the phenomenon completely. In the last six months no infiltrators arrived in Israel. Israel is actually the only Western state which managed to control illegal breach of its borders. This would have jeopardized Israel's future as a Jewish and democratic state."

Opposition Chairwoman Shelly Yachimovich slammed the prime minister, chastising him for what she termed "fear mongering in relation to Iran," but focused her address on the massive layoffs in the Teva company, which she defined a terror attack.

"I ask you to show the same seriousness you've exhibited with relation to the Iranian threat here, where you have immediate and direct influence, and inform Teva's CEO that he will not fire any employees. Don't negotiate with him," she said.

Speaking before Netanyahu, President Shimon Peres also adressed the Iranian issue: "Rohani's sweet tongue is an improvement to Ahmadinejad's jarring tone, but the world must judge Iran according to its actions," Peres said. "A determined continuation of the economic sanctions backed by other options is a necessary task which mustn't be halted until it bears fruit. The threat is real. Neutralizing the threat is a mission for which the entire international community is responsible."

Knesset Speaker Yuli Edelstein said there is reason to fear the "big bear," Iran, and added that there shouldn't be negotiations with it if even it portrays itself as humble and peace seeking.

One of the main issues facing the new Knesset session is the haredi draft, a move expected to rile up the haredi street and its Knesset representatives. Currently, the bill's promoters and its detractors are fighting over the criminal aspect involved in the new legislation. Where things now stand, it seems only a compromise leveled from the top of the political pyramid will lead to the bill's passing the second and third readings.

The session, to last until March, will also grapple with the Governance Bill and the change of the form of government, which already passed the first reading.

The bill's clause raising the election threshold caused massive protest in the opposition, joined by a small number in the coalition, and it seems it will also warrant some sort of a wide parliamentary compromise to pass further readings.

Okaying the Referendum Bill as a basic law is also expected to raise a lively debate, especially against the background of the resumption of the peace talks with the Palestinians. However, most estimations conclude the bill will eventually pass.

Apart from these subjects, the session will also discuss the Praver outline, which deals with the Bedouin settlement in the Negev, and the diplomatic negotiations with Palestinians. During the session the Labor primaries for party chairperson will be held, and the campaigns for the presidency are expected to ensue with Reuven Rivlin and Binyamin Ben-Eliezer considering themselves up for the job.