Eve of resumption of talks between Iran and West, ayatollah slams Israel, US in annual hajj speech. 'Arrogant governments, headed by the USA deceive public opinion in different countries,' he says

Iran's Supreme Spiritual Leader Ayatollah Ali Khamenei said on Monday that "we should not make a mistake in knowing the main enemy, who in the present time is global arrogance and the criminal Zionist network."

In his address to the hajj pilgrims, Khamenei mentioned Israel several times: "we should properly identify the methods of this hostile enemy which is creating discord among Muslims… Moreover, we should identify their agents and those who are, knowingly or ignorantly, dependent on them. "

Khamenei also leveled sharp criticism at the West. "Arrogant governments, headed by the USA, conceal their true character with the help of comprehensive and advanced propaganda tools. By claiming that they support human rights and democracy, they deceive public opinion in different countries," he said. 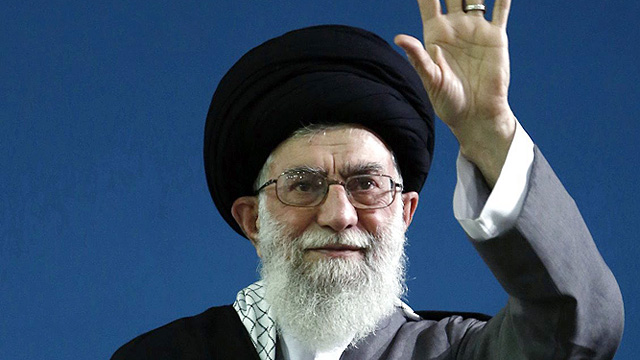 He then attacked Israel and the US: "For decades, the oppressed Palestinian nation has been receiving strikes as a result of the crimes of the Zionist regime and its supporters. In the countries of Afghanistan, Pakistan and Iraq, terrorism - which originates from the policies of global arrogance and its agents in the region - has ruined the lives of the people. "

He expressed his support for the Syrian regime: "Syria has come under the attack of arrogant powers and their regional agents because of supporting anti-Zionist orientations and it has experienced a bloody civil war."

Meanwhile, ahead of the talks between Iran and the world powers, 10 prominent senators, both Democrats and Republicans, warned President Barack Obama against Iran and said it must first prove it isn't running negotiation while "the centrifuges are spinning."

In a letter, the senators noted that sanctions should only be lifted if Iran halts its nuclear program, and urged him to keep the threat of military action on the table.