Instability in Mideast, US conduct in region lead to secretive cooperation between Israel, Arab, Gulf states, against nuclear threat from Iran, spread of al-Qaeda

Behind Prime Minister Benjamin Netanyahu's remarks this week, saying that Arab states have begun to realize Israel is not the enemy, stands a secretive relationship that has tightened recently and includes countries that have no official diplomatic relations with Israel.

The rocky climate in the Middle East, and the weak image the US has created in the region, has led, it seems, to Israel becoming a beacon in the eyes of Arab and Gulf states in the region.

The chaos in the Mideast has led to shared security and diplomatic interests and mutual intent between Israel and these states. The latter see Israel as a steady and reliable ally in regards to Iran's nuclear threat, which affects not only Israel, but also Saudi Arabia, the Gulf states, Egypt and Jordan. 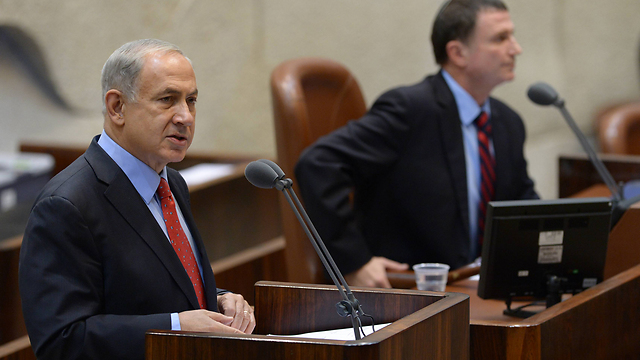 PM Netanyahu addressing Knesset (Photo: Amos Ben Gershom, GPO)
The countries also cooperate in the matter of terror and the spread of al-Qaeda and linked groups in Sinai, Syria, and Africa, and in the struggle against the Iran-Syria axis. Israelis involved in these relations explained to Ynet that some countries in the region are fearful of the void created by Washington's hesitant and confused behavior, and they seek a strong and reliable collaborator they can work with – even if it is in secret. Thus, security ties have gotten tighter than ever, as Israel, Arab and Gulf countries cooperate against Egyptian terrorism and Iran. "Common interests were created within regional instability," explained an Israeli source. Some countries see Israel as a substitute of sorts to the US in daily matters on one hand, and on the other, a bridge to Washington; public Israeli criticism has already been expressed towards the Obama administration, partly due to its handling of Assad's actions in Syria and the ouster of Mubarak in Egypt. In Jerusalem, no one aims to "replace" the US government, but in reality, they cooperate secretively with different regimes in the area. These relations will not be given an official recognition in Israel, but there is new hope for a very positive reality in the Mideast as far as Israel's strategic standing is concerned.

"We have no interest in Russians or Iranians filling (that) void," the source said, "Israel is a steady anchor to quite a few countries who consider it as reliable and standing behind red lines it has set."

The Geneva nuclear talks received many headlines in Gulf media, which tried to ease hopes for an agreement. An editorial in the Saudi newspaper al-Okaz explained that the talks do not deviate from the common regional interest game and added that recent developments were meant primarily to re-position Iran's place in the region, as well as the American position.

Saudi daily Al-Riyadh criticized Iran and claimed it conducts its policy like a man concealing his true identity, and stressed that the Islamic Republic is showing its true colors and reveals thoughts, however hides others to trick.

Saudi newspaper Al-Watan emphasized the Israeli stance, saying it poses conditions for a peaceful solution, while Asharq al-Awsat quoted an international relations expert from the University of Geneva who cooled off all warm feelings, saying the negotiations require more time, and that the US may not only normalize relations with Iran, but also allow it future and critical roles.