D., who was convicted of imprisonment in conditions of slavery and sexual abuse of six women and dozens of minors – many his own children – sentenced to prison term, will also pay NIS 100,000 to victims. His assistant sentenced to six years

26 years in prison. That is the punishment meted out Thursday morning by the Jerusalem District Court on the head of a "sadistic cult" in the Jerusalem area. He was also ordered to pay NIS 100,000 to his victims. His aide, who was convicted alongside him in court, was sentenced to six years in prison.

In September, the head of the sect and his aide were convicted of sexual offenses, violence, imprisonment in conditions of slavery and abuse of women and dozens of minors – some of whom were biological children of the father of "the family." The father, known as D., and his assistant, were arrested with much publicity two years ago. Twenty charges were filed against the two, and they were convicted of most.

According to the verdict, the "family" consisted of six women and dozens of children. The father persuaded the women to join them peacefully, but once they joined, life became a living hell of horrific violence, and physical, sexual and emotional abuse towards them and their children. Even so, some wives continued to be faithful and denied the charges against him. "There was only love at home," they claimed after the conviction. "It is all lies." Publication of the full indictment has been forbidden, in order to prevent the identification of dozens of young children and their mothers, but a shortened version was released. According to the indictment, D. saw himself as the successor of a well-known figure from his Hasidic movement and the person chosen to distribute his doctrine in the world. He got more and more women to join his cult by convincing them of his "powers” – at first amiably. Once these women fell for his charms, his pleasant behavior was replaced with violence, abuse and contempt – which moved on to the next generation when the children were born. 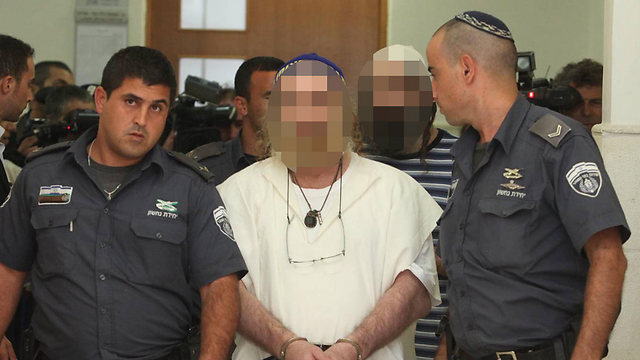 Father of the "family" in court (Photo: Gil Yohanan)

The indictment says D. headed a "family" of six women and dozens of children, some of them his biological kids, who lived in apartments in Jerusalem, Tel Aviv and Tiberias, and treated them brutally and violently, doing "whatever he wanted." He was accused of fully controlling the women and children's lives, turning the kids into beggars and instilling his religious doctrine from dusk till dawn, using cruel measures to punish them according to his whims, erasing their personality and distorting their thoughts.

The punitive measures, according to the State Prosecutor's Office, were carried out with unusual cruelty, using harsh violence, imprisonment, starvation, physical and mental abuse and humiliation, including serious sex and violence offenses and keeping the children away from their mothers. Prosecutors claim that the methods of punishment, at times carried out by family members on D.’s orders, were also used against children of the “family.” D. was convicted of serious sexual offenses against his stepdaughters and his other children, as was his assistant. Among other things, D. married his assistant’s ex-wife, and did not spare her of abuse. According to the State Prosecutor's Office, the brutal regime in the "family" home and his full control over the women and children stemmed from his charismatic personality and spiritual traits they attributed to him.

The assistant lived in the “family’s” home, and took an active part in the many violent and sexual offenses committed over the years, including imprisonment in conditions of slavery, abuse of minors, false imprisonment, sexual abuse and violence. The other accused took part in committing a violent sexual offense in a single incident.

Personal journals kept by the women and children helped police investigators solidify their case. The diaries pointed to the details of the shocking affair, revealed in August 2011 by one of the women who complained to the authorities. A search of the detainees' homes revealed electric shockers, ropes and rods, as well as medical documents from different hospitals across the country, which point to physical injuries suffered by the children.