MDA decides to shut down centers after State fails to transfer NIS five million, which could lead to critical delays in arrival of armored ambulances in cases such as the Psagot shooting

Magen David Adom (MDA) ambulance dispatch centers in the West Bank may be shut down in two weeks due to insufficient funds, despite the rising tensions in the territories, the organization said.

If the shutdown goes through, ambulances called in for emergencies which call for an armored ambulance, such as the Psagot settlement shooting or the murder of Maj. Gen. Sariya Ofer, will have to be dispatched from afar, with significantly longer delays.

The MDA has already started the closure process, after first alerting the Health Ministry, but due to Ynet's intervention, Minister Yael German agreed to postpone the procedure by two weeks. 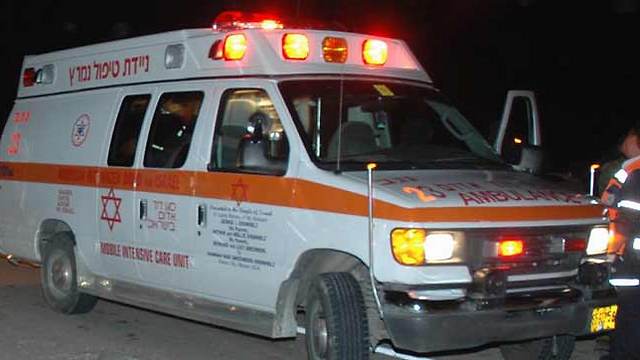 According to the MDA, the State has transferred only NIS five million - half the funds initially promised to operate the dispatch - not enough to cover their operating needs.

After settlement leaders' attempts to use their influence to secure the second half failed, Eli Bin, the MDA's director general, sent a letter to all the relevant ministries and informed them that as all the pleas were rejected, the organization is left with no choice but to minimize operations and shut down the dispatch centers.

The cutbacks in operations mean there will be no armored vehicles or paramedics on call in the settlements, an absence which could prove critical in the case of attacks by Palestinians. In the Psagot shooting, for instance, the IDF instructed all the non-armored ambulances to steer clear, fearing the shooter may be inside the settlement. Without the dispatch centers, with no armored ambulances at the ready, precious minutes would have passed before the wounded would have been tended to.

The MDA said in response: "The MDA's dispatch centers in Judea and Samaria have a high overhead. To operate these centers, the government took upon itself to fund them with NIS 10 million annually, a sum significantly lower than the operating expense.

"This year, and despite receiving only half the sum the State promised, MDA dispatch centers in Judea and Samaria were in operation, due to the organization's commitment to aid in saving lives as much as possible in these areas.

"However, last week we were informed the State doesn't intend to transfer the additional five million, and therefore we are forced to close the centers in Judea and Samaria, starting next week."

The Health Ministry claims the MDA received all the funds allotted to it by the State budget, and that the additional five millions are not included in the budget and were usually given to the MDA by the Ministry for Strategic Cooperation.

"Recently the MDA receive a notice that despite the promises given to it to bolster the services in Judea and Samaria, there is no budget, which jeopardizes the continued operation of services," said the ministry's statement.

"Following the MDA director's appeal to the Health Ministry, Minister Yael German is working to ensure that the service will not be harmed and will continue to be given as necessary."