Officials in Ankara described the Washington Post article claiming Turkey deliberately blew the cover of an Israeli spy ring working inside Iran in early 2012 as part of an attempt to discredit Turkey by foreign powers uncomfortable with its growing influence in the Middle East.

A senior official from Prime Minister Recep Tayyip Erdogan's ruling AK Party said such accusations were part of a deliberate attempt to discredit Turkey and undermine its role in the region following election of Iran's relatively moderate president Hassan Rohani.

"Turkey is a regional power and there are power centers which are uncomfortable with this ... Stories like these are part of a campaign," the official said, asking not to be identified because of the sensitivity of the subject.

"It's clear the aim of some is to spoil the moderate political atmosphere after Rohani's election ... and to neutralize Turkey, which contributes to solving problems in the region and which has a relationship with Iran."

Turkish Foreign Minister Ahmet Davutoglu said the allegations were "without any foundation."

"(Turkish intelligence chief Hakan) Fidan and other security agents report only to the Turkish government and the parliament," he said.

Davutoglu said it was a "slanderous" report targeting Turkey's "respectability" and highlighted the "excellent" work of Fidan, who is a key advisor to Erdogan. 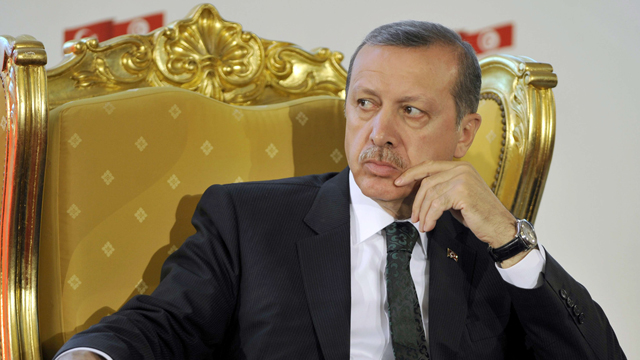 Relations between the two US allies have been fraught ever since, with military cooperation frozen and mutual distrust scuppering attempts to restore ties, despite efforts by US President Barack Obama to broker a reconciliation.

Washington Post columnist David Ignatius said Israel apparently used to run part of its Iranian spy network out of Turkey, giving Turkish secret services the opportunity to monitor their movements. The paper quoted US officials as saying Israel believed the Turks would never turn on the Jewish state after years of cooperation.

However, it said that in early 2012 Erdogan disclosed to Tehran the identities of 10 Iranians who had travelled to Turkey to meet Israeli spies.

Iran has long accused Israel of spying on it soil and of killing several Iranian nuclear scientists - the last in January 2012. Israel and the West accuse Iran of looking to build an atomic bomb. Tehran denies this.

In April 2012, Iran announced that it had broken up a large Israeli spy network and arrested 15 suspects. It was not clear if this was connected to the alleged Turkish leak.

"The Turks made a strategic decision ... to seek the leadership of our region, in the Middle East, and they chose the convenient anti-Israeli card in order to build up leadership," he told Israel Radio.

Obama tried to broker a reconciliation between Turkey and Israel in March, persuading Israeli Prime Minister Benjamin Netanyahu to apologies for the 2010 killings.

However, Israeli officials said subsequent attempts to build bridges by agreeing on a deal to compensate families of those killed in the Israeli naval raid had floundered.

"The only thing that we have achieved since March is to show the Americans that Erdogan is not remotely interested in a reconciliation," said an Israeli diplomat, who declined to be named given the sensitivity surrounding the issue.

Shortly after the 2010 incident off the shores of Gaza, the then-Israeli defense minister Ehud Barak voiced concern that Turkey could share Israeli intelligence secrets with Iran.

"There are quite a few secrets of ours (entrusted to Turkey) and the thought that they could become open to the Iranians over the next several months ... is quite disturbing," Israel's Army Radio quoted him as saying in August 2010.