"There is an atmosphere that creates motivation to carry out terror attacks." The IDF is continuing to investigate Thursday evening's attempted terror attack, during which a Palestinian rammed a tractor into an IDF base and tried to run over soldiers until he was shot dead. Following the incident, which took place between Jerusalem and Ramallah, army officials expressed fear that the terror attacks in the West Bank will continue.

The terrorist is apparently Younis Radeideh, whose brother tried to run over police officers with a bulldozer in Jerusalem in 2009. Two officers were lightly hurt in that incident.

An initial investigation into Thursday's incident showed that just before 7 pm a tractor approached the main gate of the base, which serves an Artillery Corps battalion. The soldier guarding the gate walked toward the mechanical digger, at which point the terrorist stepped on the gas and tried to run him over. "The soldier jumped out the way at the last second, but the terrorist wouldn't give up. He turned around and tried to run over the soldier again and again," a senior officer in the Judea and Samaria Division said. "At this point the terrorist raced toward the guard post, where the soldier fled to, and rammed into it with the soldier inside, knocking it a few meters forward. The soldier sustained light injuries to his leg." 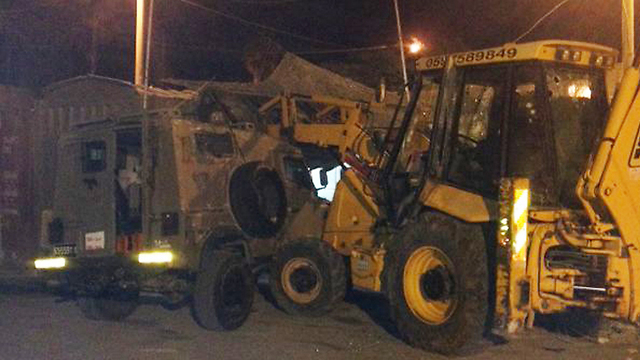 The tractor driven by the terrorist (Photo: IDF Spokesperson's Unit)

The officer said that a concrete pillar placed near the entrance to the base is what prevented the terrorist from continuing to try to hurt the soldier. "The terrorist drove another 150 meters (about 164 yards) into the base while crashing through the gate. He hit one of the battalion's vehicles and an armored jeep as well. Two fighters who heard the noises understood it was a terror attack. They opened fire and neutralized the terrorist," said the officer.

The security establishment estimates that the terrorist was not sent by any organization, which made the attack more difficult to anticipate. The senior officer said more terror attack may follow. "It's hard to put a finger on one element as a cause for the recent events. One incident follows the next, and there is an atmosphere that creates motivation to carry out terror attacks, but there is nothing that connects the latest attacks," he said. "We expect a broad range of incidents." The Judea and Samaria Division is preparing for a number of possible scenarios that may play out with the conclusion of the peace negotiations between Israel and the Palestinians. An officer in the division told Ynet recently that the collapse of the talks may lead to despair and loss of control in the territories.

A day before the murder in the Jordan Valley of retired Colonel Sariya Ofer, a security official told Ynet that the series of recent terror attacks, which were carried out by lone terrorists, may encourage "individual terrorism." The official spoke after a series of terror attacks in the West Bank - the kidnapping and murder of IDF soldier Tomer Hazan in Beit Amin; the fatal shooting of soldier Gal Kobi in Hebron; and the attack on a nine-year-old girl in Psagot. The girl was injured in the attack.

In Israel, the latest incidents are not currently perceived as a wave of terror – certainly not an organized and guided one. Regardless of recent events, cooperation between the IDF and Palestinian security forces remains tight and this pleases senior officials in the security system a great deal.

Even though terror cells in the West Bank are under constant watch, both by Israel and by the Palestinians, Hamas is trying to ignite the area due its current regional weakness. Palestinian prisoners who were released under the Shalit deal and deported to the Gaza Strip are trying to direct terror in the West Bank by setting up cells. The purpose is terror against Israeli targets and kidnappings. The security establishment's intelligence agencies are the reason why most attempts were thwarted while they were being planned. Security forces have thwarted over 30 kidnapping attempts.