With Czech Parliament election nigh, Czech artist places a protest statue in the midst of the Vltava River in Prague against the possible return of Communists to power

A Czech artist known for his anti-communist stance has floated a huge statue of a hand making an obscene gesture on Prague's main river, days before parliamentary elections that could give the communists a taste of power almost a quarter-century after they were ousted.

David Cerny's giant purple hand, extending an oversized middle finger, was placed on a pontoon on the Vltava river Monday, near the famed Charles Bridge and visible from Prague Castle, the seat of the presidency. 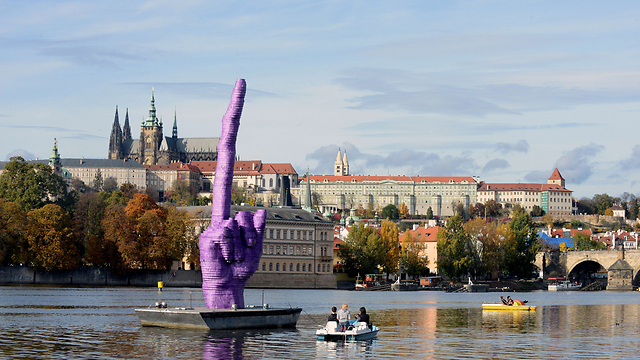 President Milos Zeman supports a plan by the leftist Social Democrats to form a minority government after the vote with tacit support from the maverick Communist Party.

It would be for the first time since the 1989 anti-Communist Velvet Revolution that the party would get power, at least indirectly.

The early elections will be held on October 25-26, seven months before the end of the parliament's four year term. The republic underwent a political quake in recent months, after Prime Minister Peter Necas announced his resignation in June after he was tied to corruption and espionage scandals together with others in his administration.

Following his resignation, the entire Czech government was forced to resign. He was replaced by Jiri Rusnok