Municipal elections day heats up, as mayoral candidates tour their cities and ask the voters to take part in the democratic process.

Prime Minister Benjamin Netanyahu and his wife exercised their right to vote in the country’s local elections Tuesday morning in the Rehavia neighborhood of Jerusalem. Netanyahu was asked whether he was satisfied with his vote, due to political negotiations and a bill that would require a majority of 80 Knesset Members to hold negotiations about a divide. "As long as I am prime minister, Jerusalem will remain our united capital,” he said.

Ron Huldai who was first elected mayor of Tel Aviv in 1998, took his grandchildren to school early Tuesday morning. After returning home, he said, "I feel great this morning.” On his chances in the elections he added, "never ask the mayor about his chances – in the end the residents decide. But it is important for everyone to go vote and take an active part in the democratic process." After exiting the poll station, he added: "The feeling is exceptional. Would be happy to continue as mayor, it's exciting."

Knesset Member Nitzan Horowitz woke up at 5 am on one of the most significant days of his political career. "I woke up early, drank coffee and prepared mentally for this day," said Horowitz, who is running for mayor in Tel Aviv. "It is an excellent feeling. I managed to check out some polling stations and there is a lot of sympathy. People come up to me, hugging and taking a photograph and we are very optimistic." Alongside Horowitz and Huldai is chair of the opposition, Aharon Maduel from the faction City for All.

Jerusalem Mayor Nir Barkat also voted at the ballot box in the city's Beit HaKerem neighborhood. He was accompanied by family members, and expressed a sense of confidence regarding his victory in the election. 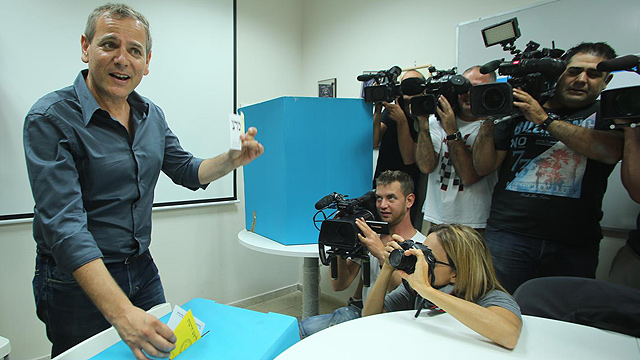 Barkat’s main rival, Moshe Leon, opened the morning with prayer at the Western Wall and voted later on. He said: "Since the age of 18, every election day is a celebration for me and for democracy. Today is my first time as a candidate in the elections, I am very happy and excited and waiting for tonight to see the results of our beautiful victory. I ask all Jerusalemites, go vote. It is a significant day for you, go vote and improve your life."

Candidate for mayor of Ramat Gan, Carmel Shama-Hacohen, came to the polls in Ramat Ef'al, accompanied by his wife and three children. "I'm excited this morning and the city of Ramat Gan is excited as well. The city is opening a new chapter and residents have a lot of expectations. The municipality today speaks its mind, but residents want something new and they will have their say at the ballot box." Israel Singer, also a candidate for mayor, said: "I fulfilled my civic duty. I urge all residents of Ramat Gan to go to the polls and vote. Spend five minutes."

MK Hanin Zoabi, running for mayor of Nazareth said she is "representing a rational discourse of young people interested in promoting the city."

She noted she was "the first and only (woman) with the Arab sector who is running for mayor," and expressed hope that "this move would inspire more women in the next elections."

Among the hundreds of candidates who put themselves to the test Tuesday as part of Israel's elections for 191 municipalities, three mayors – Shlomo Lahiani, Shimon Gapso and Yitzhak Rochberger – ran despite active indictments and rejected appeals to the Supreme Court.

resident Shimon Peres cast his ballot at the Jerusalem Highschool for the Arts polling station. He called on all citizens to turn out to vote, “The municipality serves an important position in the daily life of the citizen, no less than the government – young and old – come to the polls.”

"The elections are important across the country and here in Jerusalem – it is not enough to say we are in favor of a democratic Jerusalem. Democracy needs to be visible, to go out and to vote," the president said, and added, "Israel is the only country in the Middle East that votes with cards and not with bombs. The democratic process brings forth pride."

By noon, some 100 violations of order were registered outside polling stations around the country. In Haifa, police is looking into suspected fraud after ballots were found with two candidates' names.

Internal Affairs Ministers Gideon Sa'ar implored the public to go out and vote. "We know most voting takes place when people come home from work, and we're hoping to see a surge in votes in the next few hours," he said. The minister also commanded polling stations around the country for "maintaining the democratic process". 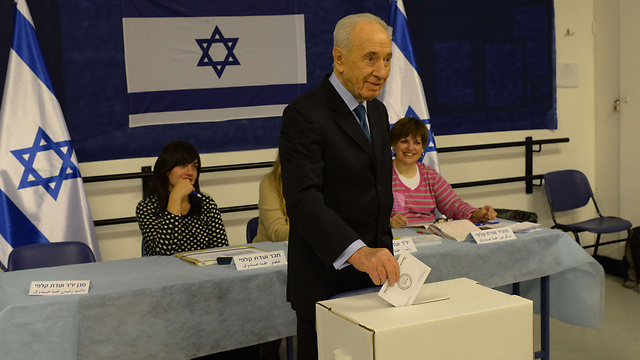 According to police, nine people were detained and six were arrested Tuesday for suspicion of disturbing the peace, using fake IDs and assault.

Out of 700 complaints, 260 were regarding wrongful election propaganda and 200 regarding disturbance of the peace near and in ballot polls.

On Monday night, Israeli Police also arrested two suspects for involvement in the shooting of a Lod city council candidate named Abd al-Karim Azbarga. He was shot on the street, and rushed by family members to Assaf Harofeh Medical Center, where he is in moderate to serious condition. The two who shot him are being questioned and will be taken for a remand hearing later Tuesday at the Ramla Magistrate's Court.

In Haifa, there were reports of missing ballot cards at some locations, the election committee was worked to fix this.

Minister Naftali Bennett, chair of Habayit Hayehudi, voted near his home in Raanana and said: "This is the last day that my party does not have at least one mayor in Israel. Habayit Hayehudi is looking to double its strength and become an influencing factor in local politics, as it is in national politics."