As number of refugees outside camps in Turkey is rising, members of Assad's Alawite sect seeking refuge outside home country fear retribution

In a small park on the edge of old Istanbul's Eminonu square, women sit begging, Syrian passports in their outstretched hands, "Please help in the name of God" on sheets of paper at their feet. In this bustling city, where fisherman line the shore of the Golden Horn and tourists mingle with traders in the alleyways of the spice bazaar, the war raging just over Turkey's southern border feels very distant.

But as Syria's conflict takes on an increasingly sectarian dimension, a growing number of those fleeing to Turkey are shunning the refugee camps on its southern border and venturing instead to its major cities, as far from the war as possible.

"We can't be comfortable at the camps. Yes, they give them food regularly, and conditions are maybe better, but we hear that they send all the men to fight at night," said Tariq, 27, cradling his young son in his arms, his wife at their side. "We don't want to fight. I escaped the fighting, why would I go back again?" he asked, sitting in a cemevi - an assembly house used by Alevis, Turkey's biggest religious minority - in Istanbul's working-class Gazi neighbourhood. Tariq and the roughly 40 Syrian refugees he is sheltering with are mostly Alawites, an offshoot of Shiite Islam and the same minority sect as Syrian President Bashar al-Assad.

It is not an identity they readily reveal.

Perceived, often wrongly, as die-hard Assad supporters, they say they fear retribution in Turkey's refugee camps, which are thronged by Sunni Muslim opposition supporters, including rebel fighters and their families.

"I'd rather go and die in the war in Syria than stay in a camp," said Miran, 29, smoking a cigarette on a shredded mattress in a tent in the courtyard of the cemevi.

"They don't like Alawites in the camps and they know we're Alawites. We are neither opposition members nor Assad supporters. We are just citizens," he said.

Syria's civil war has killed more than 100,000 people, sent millions fleeing from their homes and divided the Middle East between Sunni Gulf states and Turkey, which mostly support the rebels, and Shi'ite Iran and Hezbollah, which back Assad. 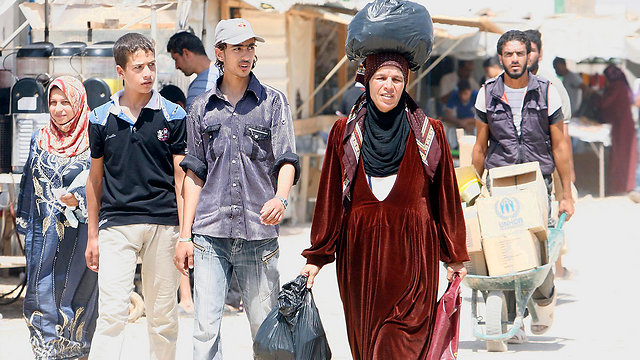 Turkey has kept its borders open to refugees throughout the 31-month-old conflict and denies any sectarian agenda, insisting its camps are open to all. But its staunch support for the opposition puts some refugees in a difficult position.

"Turkey says it doesn't make a distinction between Alawites and Sunnis, but people do, and we can feel it even here," said a Syrian refugee in Eminonu, declining to give his name.

"We just want to work, make a living, but they don't give us a job," he said, emphasising that he always told prospective employers he was Sunni when looking for work.

Turkey shelters more than a quarter of the 2 million people who have fled Syria's war, 200,000 of them in the official camps dotted along its 900 km (560 mile) border.

But twice that number live outside the camps, including almost all the refugees who have arrived over the past few months. While many have the means or family ties to find lodging, the numbers of those forced to sleep rough appear to be growing in cities, including Istanbul and Ankara.

Zeynal Odabas, head of the Pirsultan Abdal Cemevi hosting the refugees, said Turkey should consider the diversity of Syria's population and set up separate camps for different groups.

He criticised the government for allowing fighters from the rebel Free Syrian Army and factions such as the al Qaeda-affiliated Jabhat al-Nusra to shelter in the camps.

"While people from Nusra and the Free Syrian Army are being hosted in the camps, these poor people have been living on the street," Odabas said, citing the fighters' presence in the camps as a reason many refugees preferred to go it alone.

Turkey has long championed more robust backing for Syria's fractious armed opposition, arguing it would bring a quicker end to Assad's rule and give moderate forces the authority they needed to keep more radical Islamist elements in check.

But Ankara's critics say that its policy has in fact allowed Islamist militants, some of them accused of committing atrocities against Alawite communities, to gain ground in Syria.

Turkey denies arming the rebels or facilitating the passage of foreign fighters who have swollen the ranks of al Qaeda-linked factions, but the border is difficult to police. Rebels, refugees and smugglers have been able to cross illegally.

Turkey's Disaster and Emergency Management Directorate (AFAD) says it is aware of the influx of Syrians who bypass the camps, but that it can do little for those who decline its help.

"We do the best we can within the rules of a state of law, but we can't simply force people," said spokesman Mustafa Aydogdu, adding that there were Alawites living in the camps and that there had been no reports of disputes.

"We haven't received a specific demand from Syrians coming to Turkey to set up a separate camp for any particular group. If there is such a demand, it may be considered," he said.

The agency does not register refugees by their religious affiliation in the camps, he said.

With the United Nations expecting another 2 million Syrians to become refugees in 2014 and 2.25 million more to be displaced inside Syria, Turkey's open-door policy means the numbers of destitute Syrians on its streets is only likely to rise.

"We can't go back until the war is over," said Ahmed, 15, who has lived in a makeshift tent near an Ankara shantytown with no access to water, electricity and heating for four months.

"We are more comfortable here, we hear there are a lot of disputes, disagreements at the camps. People complain, so we don't want to go," he said.

He is among around 150 largely Syrian Kurdish refugees, many of them barefoot children, living in tents on a muddy hillside, near where property developers are building high-rise blocks.

Temperatures are already dropping and will soon fall well below freezing. When a car occasionally drives by, the children run behind it, cheering and hoping it is one of the local Turks who regularly bring food and clothing.

"We are just holding up now," said Samer, 31, who had worked as a keyboard player in Aleppo before fleeing. "They say the first snow will fall in a couple of months. God help us then."