According to the report, Kerry was unable to convince Netanyahu to soften his demand that Iran dismantle its nuclear program in exchange for sanctions relief. But the criticism by Saudi officials has been the most vehement, the report said.

Saudi Arabia launched a campaign against the United States’ policy in the Middle East in private comments to diplomats and reporters, as well as in public remarks by a former intelligence official.

Saudi officials have made it clear they are frustrated with the Obama administration — not just for its reluctance to do more to aid Syrian rebels, and not just for its willingness to engage Iran in negotiations, but also for its refusal to endorse the Egyptian military’s ouster of President Mohamed Morsi and the crackdown on the Muslim Brotherhood.

Saudi Arabia’s former spy chief and ambassador to the US, Prince Turki al-Faisal complained about the White House’s decision to embrace an agreement to eliminate Syria’s chemical weapons instead of carrying out a cruise missile strike against Assad’s forces.

“The current charade of international control over Bashar’s chemical arsenal would be funny if it were not so blatantly perfidious, and designed not only to give Mr. Obama an opportunity to back down but also to help Assad to butcher his people,” he said. 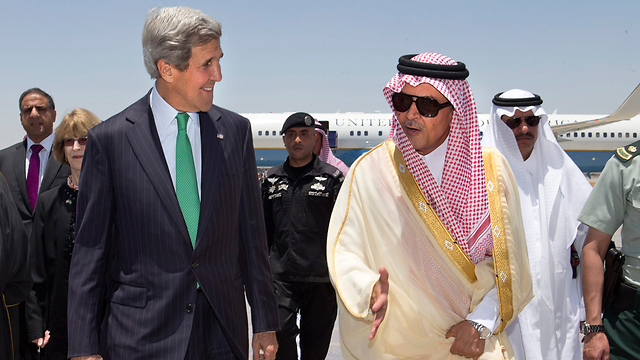 Robert M. Danin, a senior fellow at the Council on Foreign Relations and Middle East expert says “There is a lot of confusion and lack of clarity amongst US allies in the Middle East regarding Washington’s true intentions and ultimate objectives."

“There is also widespread unease throughout the Middle East, shared by many US allies, that the United States’ primary objectives when it comes to Iran, Egypt or Syria are to avoid serious confrontation.”

Meanwhile, former Military Intelligence chief Amos Yadlin told New Republic magazine that while he endorses dialogue with Iranian President Hassan Rohani he supports Netanyahu's position that an Israeli military strike in Iran is preferable to a nuclear Iran. "Israel doesn’t need America on D-Day. It can do it alone. It even can cope with the day after, but it does need the United States for the decade after."

The former MI chief explained that "even the most successful operation – theoretically - will stop the program for five years. If you want to make these five engineering theoretical years into a decade, until the regime changes, you need the US on board, with the continuation of sanctions, with leading the international campaign against the renewal of the nuclear program in Iran, and maybe supporting (Israel) in doing it again."

"Israel only doesn’t want to do something that is going 180 degrees against American vital interests as long as it is not a response to a threat that is almost an existential threat.

" I think in late 2013 or early 2014, especially if America sees that Iran is not serious about reaching an acceptable agreement and only continues to buy time, the US will accept an Israeli attack because a nuclear Iran is absolutely against American vital national security interests. And since many people believe that America, after becoming energy independent, is pivoting to Asia, it is even less likely that America will stop Israel from a self-defense measure."