Erdan: Israel not prepared for earthquakes

Home Front Defense Minister interviews with Ynet studio, stresses importance of protection against earthquakes. Conclusions reached in 2012 drill yet to be implemented, Ynet learns, despite predictions that up to 7,000 will die, great damage will occur

A scenario formulated by an inter-ministerial committee regarding an earthquake in Israel estimated that 28,600 buildings will be destroyed or suffer heavy damage, 290,000 buildings will sustain light to moderate damage, 7,000 people will be killed, 8,600 wounded moderately to severely, 9500 will be trapped, and 170,000 will remain homeless, in the case of an earthquake at a rate of 7 on the Richter scale along the Syrian–African fault line.

Ynet also learned that a year after the Home Front Command’s ‘Turning Point 6’ drill, at least half of the conclusions have yet to be implemented. In an interview with Ynet studio, Home Front Defense Minister Gilad Erdan said: "It is true that in dangerous places and high risk points, the country has still not provided an optimal solution."

Last week, there were several earthquakes in northern Israel, bringing the subject to the headlines again, and leaving a disturbing picture. Conclusions from the exercise held in October 2012 showed alarming gaps between the reality that exists and what is desired.

Among other things, the ministerial report stated that there was an urgent need to institute a warning system for tsunamis and earthquakes, because “the tragedy could become a catastrophe without a warning system." Also, the issue of protected housing for the population was described as an ideal long term solution. And another point was the fortification of essential facilities to ensure continuous functionality and international cooperation on the subject of natural disaster assistance.

“The state should allocate funds and encourage contractors to undertake programs of fortification... Protection against an earthquake is as important as air bags in a vehicle," Erdan noted.

During the studio interview, Erdan also addressed the issue and said that the numbers presented were estimated years ago by experts. He noted that it would be impossible to give an immediate response to those who are injured by an earthquake, so there was a need for a different type of preparation. "It takes more than a day or two to evacuate casualties," he said.

"The relief force should be created on the local level, such as civilian patrols, because we will not be able to simultaneously reach all places where people are hurt. No country in the world can be in a state of complete readiness. That costs hundreds of millions. We need to give a response; this process is happening better than in the past.”

Regarding the delay in installation of sensors, Erdan said they were not a miracle solution: "Sensors teach us about what is happening or has happened. They do not know how to predict when an earthquake will occur. A team which I head is trying to see how to close the gaps.” 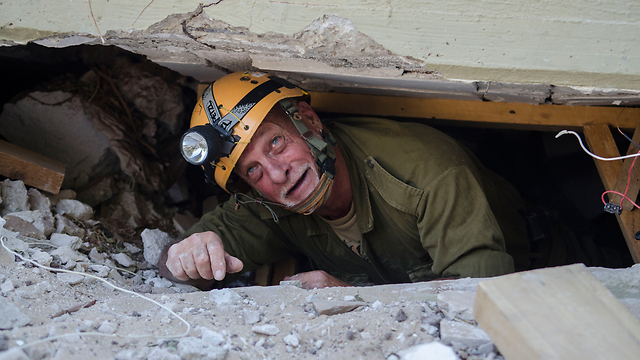 The Home Front Command admits that work on the issue continues within budget constraints, and they define the level of preparedness as reasonable. "The main scenario for which we are preparing is war, and the other is natural disaster," a Home Front Command officer said.

"Both of them exist under budget constraints…For example, protecting a missile factory with hazardous materials located near a population center is not the same thing as protecting that plant from earthquakes," the officer noted.

According to the officer, the actions that were taken in regard to earthquakes were led by HFC Major General Eyal Eisenberg, and included the creation of a subdistrict made up of thousands of fighters and rescue personnel that can respond “within 30 minutes"; search and rescue units training as an elite unit, with the capacity to quickly fly to any part of the country where disaster occured; providing information to civilians so they know how to respond to an earthquake; and improving the ability to absorb international aid – all of which will be reflected in the exercise to be held next month at the Ashdod Port and Ben Gurion International Airport.

Despite the limitations, the senior officer said, new capabilities are being developed by the command regarding a large scale earthquake: Intelligence gathering over the disaster area by the air force drones; patrols in small planes or police helicopters, and the "Options" program, which provides predetermined scenarios including one for a nationalistic attack at any location.

The program determines why and how each force operates, including a sub-scenario which recently has been further-focused – a tsunami wave from Lake Kinneret covering the towns and roads around the lake.

”We now have an operational command at the General Staff level to receive forces on a large-scale, including battalions, and short time tables, favoring the HFC at times of major disaster," said the officer. He declined to name a number, but it is estimated that whole battalions will be diverted from their missions to aid in disaster relief. "This is a national event and the IDF will operate its arms at full power from end to end, including the navy and air forces.

Atilla Somfalvi contributed to this report