Hundreds march against election result, citing fraud, haredi coercion. 'There will be no religious war in Beit Shemesh,' mayoral candidate who lost says

Hundreds of Beit Shemesh residents were marching Thursday across town, headed to city hall, where a rally against haredi coercion in the city is scheduled.

Protesters, both secular and religious, insist that Moshe Abutbul's win in the municipal election was the result of fraud.

The procession was walking through haredi neighborhoods, prompting clashes between local residents and protesters. 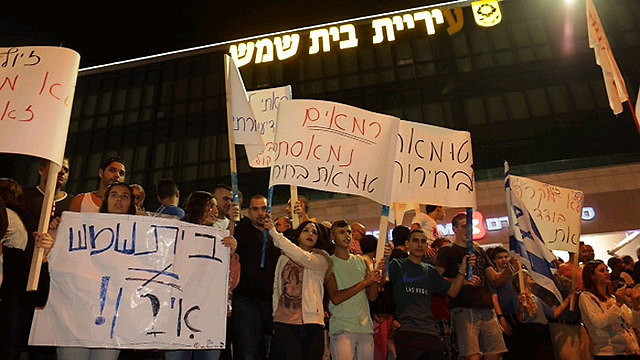 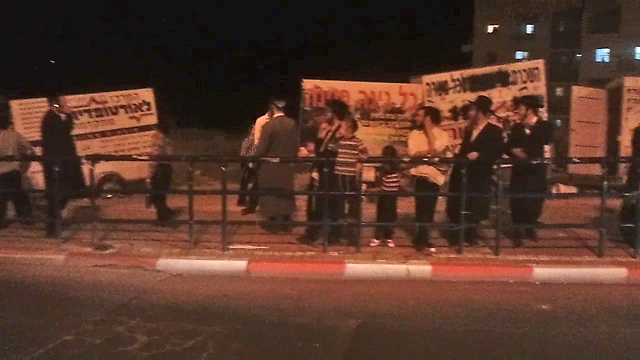 "I'm a Zionist, you're a weirdo," one of the protesters' banners read.

Eli Cohen, who lost the election to Abutbul, was also present at the rally, and was welcomed with applause. Attendants chanted, "not giving up on Beit Shemesh, and "Moshe Abutbul go home."

Cohen turned to protesters saying "This rally was born of love; this is a battle over our home. It all began when Naama Margolis was spat on and no one with the municipality cried out in her defense, it continued when there was a lynch on a bus and again – the mayor said nothing though I asked him to. Even when clahses erupted between haredim… he told me to stay out of it. It ended in a dirty election race."

Cohen further noted, "Today we say no to violence. This is not a battle between religious and secular residents; there will be no religious war in Beit Shemesh. Take a look at how many religious and observant Jews are here in this protest – they say 'only we can keep Beit Shemesh Jewish,' as if you and I can't.

"All my life I've fought for the Jewish identity of olim, and I was the one who was called a goy and a Nazi. They will create a divide and we will bring about unity; they will instigate hate and we will promote love… we will respect all residents – even the haredim we will respect more than they do us."

One of the rally's organizers told Ynet that the protest is expected to draw thousands of participants.

Yisrael Shpiz, a Likud member in the city who was one of the protest's organizers, said: "We kept the democratic process pure throughout and we were shocked, but they lied, cheated and stole our election and our city. We won't let that happen."

Shpiz dismissed the claim that hate of haredim is behind the rally, saying, "Beit Shemesh is a melting pot. We accept anyone here. We never had a problem with haredim. There's a non-kosher store in the city right next to a Judaica store. We all live together. The problem started when they started taking over our city forcefully."

Referring to the confiscation of some 200 IDs of Israelis abroad in Beit Shemesh apartments on the day of the municipal elections, she said the IDs fraud was "the tip of the iceberg," for various fraudulent acts that tipped the scale in favor of the haredi contender for mayorship. "I most certainly believe the results can be overturned," she said, "and that new election can be declared, if we can gather evidence regarding the fraud, seeing as the elections were determined by several hundreds of votes." The organizer argued that many haredim have changed their address in Interior Ministry records so as to be able to vote in Beit Shemesh and support the Shas nominee Abutbul, who eventually remained mayor.