In elite Shaldag Unit ceremony, IAF fighter surprised by parents who came from other side of world thanks to anonymous donation: 'Felt like a dream'

L. (21), a fighter in the Israeli Air Force elite unit Shaldag who recently made aliyah from Australia, already accepted the fact that his parents will not stand beside him in his unit's training graduation ceremony, which was held in Masada this week. Yet moments before receiving the fighter pin he had been dreaming about for two years of exhausting training, he discovered his parents came to surprise him from across the planet.

Little can be told about the elite commando Shaldag Unit, its operations and the training its fighters undergo. L., a young Jewish man from Melbourne, also did not know about the unit when he arrived in Israel as part of the Garin Tzabar program in order to join the IDF. He began the army recruitment process and successfully went through rigorous training until he was found suitable to serve in the secret unit. He joined the army two years ago, but his parents stayed back in Australia.

"It's not easy when there are no parents when you go home for the weekend after a very rough week, but I have a big family in Israel, good friends, who care for me and host me. I'm used to talking to my parents on the phone, telling them what's going on with me; I have a very good connection with them. It's enough for me to hear their voices to get stronger. It was not easy but everyone supported me." 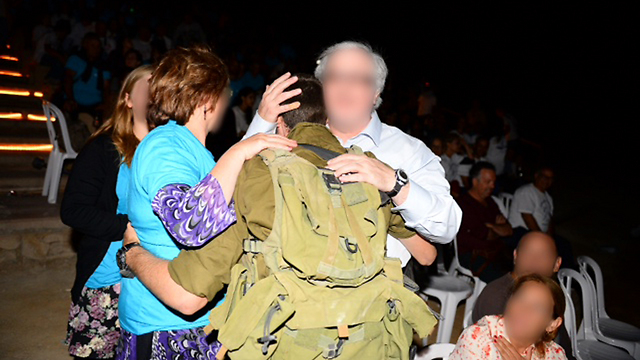 Emotional reunion (Photo: IDF Spokesperson's Unit)
The last time they met was last Passover – when L. was given a special permission to travel to Australia. After a week and a half, he returned to the unit and continued with his training. His dream, as well as his parents', was to be together on the big day when he finishes his training. Due to financial difficulties, it was not possible to realize the dream. "I already made peace with the fact they won't come. A ticket from Australia is very expensive." L., who lives on a kibbutz in the Negev, turned to his Garin Tzabar and the Kibbutz Movement, who worked to raise money for buying tickets for his parents. Eventually, an anonymous donor was found. L.'s guides and the Kibbutz Movement decided, together with his parents, to throw him a surprise. Last week, the parents arrived in Israel and stayed with relatives, while L. had no idea. They finally met at the much-anticipated ceremony in Masada. When the parents reached Masada, they could not hold back any longer and rushed to hug their son. "It felt like a dream," he said. "We were all emotional, even shed a tear. It was so beautiful to see them together after so long and after everything the boy went through," said Ofer Rimon, director of Garin Tzabar at the Kibbutz Movement.

L. is already thinking about his future in Israel. "I still don't know what I'll be doing in the future but Israel is a part of me, I love the country but I still have a lot of time until I need to make a decision about my future."