Diplomats accredited to the UN nuclear watchdog said on Friday they had no information to substantiate word from a senior Iranian parliamentarian that Tehran has halted its most sensitive atomic activity. Iran's enrichment of uranium to a fissile level of 20 percent is a major technical step taking it just short of the concentration needed for a nuclear weapon. Iran says it needs the material only to fuel a medical research reactor.

An envoy in Vienna, where the International Atomic Energy Agency (IAEA) is based, said he believed Iran was continuing to refine uranium to the 20 percent threshold despite the Iranian lawmaker's comment.

The IAEA, which regularly inspects Iranian nuclear sites, has declined to comment on the issue. But several diplomats from member states said they were not aware of any such move by Iran. 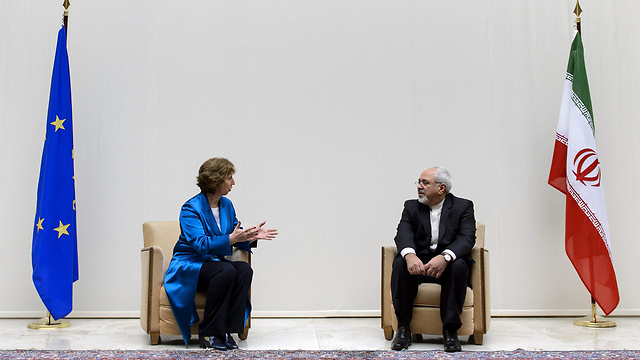 EU foreign policy chief Ashton with Iranian counterpart in Geneva (Photo: EPA)
They cautioned, however, that IAEA inspectors are believed to go to Iran's uranium enrichment plants about once a week so it is possible the agency may not yet know of any halt if it only happened in the past few days. The next quarterly IAEA report on Iran will be issued in November. World powers seeking a diplomatic solution to the nuclear dispute with Iran want it to stop the activity. Iran indicated in talks with the powers that resumed in Geneva last week that it might scale back its program to win sanctions relief. But any move to shelve its higher-grade enrichment already would be surprising, as Western experts believe Iran would want to brandish it as a bargaining chip in the negotiations, which are due to resume in the same Swiss city on Nov. 7-8. Hossein Naqavi Hosseini, a senior member of Iran's parliamentary national security commission, said Iran had stopped refining uranium above the 5 percent required for civilian power stations as it already had all the 20 percent enriched fuel it needs for the research reactor in Tehran. "The issue of suspension or halt of enrichment activities is meaningless because no production is taking place at the moment," parliament's website quoted him as saying on Tuesday.

There has so far been no other comment on the matter in the Islamic Republic, where it was a public holiday on Thursday ahead of Friday's normal weekend.

Iranian MPs have in the past made statements about the nuclear program that the government later denied. Iran's production and stockpile of 20-percent uranium is closely watched in the West and Israel.

The Jewish state, believed to be the only nuclear-armed power in the Middle East, has suggested it could attack Iran if it acquired enough of the material for one nuclear bomb, but Iran has kept its 20-percent stockpile below that threshold. 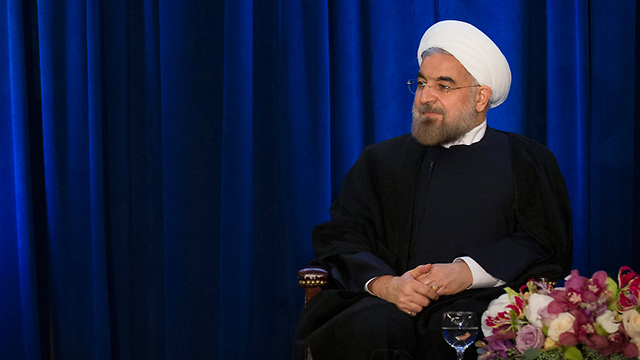 Iranian President Hassan Rohani (Photo: AP)
Tehran denies allegations by Western powers that it is seeking the capability to produce nuclear arms. While members of parliament's national security commission are regularly briefed on the nuclear program, they are not directly involved in policy-making. The big decisions are made by Supreme Leader Ayatollah Ali Khamenei. Western officials have said Iran must stop enriching uranium to 20 percent, increase the transparency of its nuclear program, reduce its uranium stocks and take other steps to reassure the world that it is not after nuclear weapons. Iran and six world powers – the five permanent members of the UN Security Council, plus Germany – said that last week's talks in Geneva were positive and constructive.

The meeting was the first since moderate Iranian President Hassan Rohani came to office in August promising to try to resolve the nuclear dispute and secure an easing of sanctions that have severely damaged Iran's oil-dependent economy.

Meanwhile, the Obama administration is asking Congress to hold off on enacting new sanctions against Iran. It says a pause in the push to impose new penalties would give negotiators flexibility in talks now underway to get Iran to comply with demands it prove its nuclear program is peaceful.

The State Department said Friday that the administration has asked lawmakers to wait on new sanctions legislation in order to give the negotiations time to get traction. Spokeswoman Jen Psaki said additional sanctions can always be imposed later if the Iranians fail to meet their obligations. She stressed that no existing sanctions are being lifted.

The administration has argued that tough sanctions brought Iran to the bargaining table. Some lawmakers maintain that now is not the time to ease pressure.