Chairman of the National Security and Foreign Policy Committee of Iran’s Parliament, Alaeddin Boroujerdi, said Saturday in an interview to the ISNA news agency that Iran continues to enrich uranium to 20%.

This following a senior Iranian official saying Tuesday that Iran has stopped enriching Uranium past 5%.

Enriching uranium to 20% is a big technical step, and the leap to a nuclear bomb is not far from it. Iran insists to enrich uranium to the 20% purity level to provide fuel for the Tehran Research Reactor, which produces medical isotopes for cancer patients; the West, however, insists that Iran is enriching uranium to develop nuclear arms.

Boroujerdi said that enriching uranium to 20% is a red line for the Islamic Republic, which hasn't stopped enrichment at all. "Some 850,000 patients need medication made in the reactor," he said. 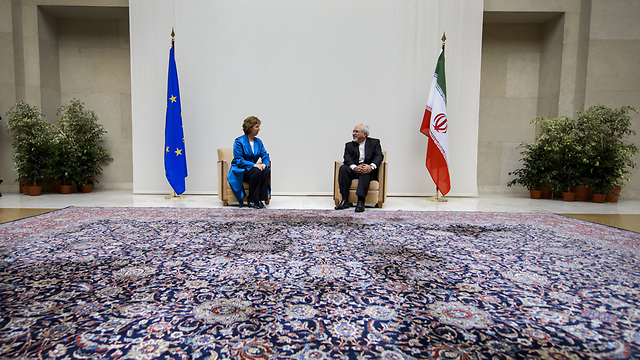 Catherine Ashton and Mohammad Javad Zarif (Photo: AP)
A Vienna diplomat said Friday that he believes Iran continues to enrich uranium at 20%. Either way, any move from Iran ceasing the 20% enrichment would be a surprise in itself, as Western experts believe Iran wants to hold enrichment as a negotiation tool for the second round of peace talks with the six powers, meant to take place in Geneva on November 7-8. Hossein Naqavi Hosseini, a senior member of Iran's parliamentary national security commission, also said Tehran had only stopped enriching uranium to levels above the 5% needed for civilian power stations because it already had all the 20% enriched fuel it needs for a medical research reactor in Tehran. "Enrichment over 5% depends on the needs of the country; Iran's nuclear industry requires 20% enrichment for providing the fuel for its Tehran reactor, but this site has its required fuel at the moment and there is no need for further production," the parliament's website quoted Hosseini as saying.

"Tehran will decide whether to have over 5% enrichment or not itself, but the issue of suspension or halt of enrichment activities is meaningless because no production is taking place at the moment," he said.