3,000 form human chain around prison where 26 Palestinian prisoners are now waiting their release. 'My country betrayed me,' Orna Amrani, whose brother's killer will be released, tells Ynet

About 3,000 people, including bereaved families and members of the Almagor group, demonstrated on Monday evening in front of the Ofer Prison in protest of the Palestinian prisoner release scheduled for Tuesday.

The protest threw into sharp relief the deep rift within the government, mainly between Prime Minister Benjamin Netanyahu and members of the Habayit Hayehudi party, headed by Minister Naftali Bennett, with regards to the prisoner release and the peace process.

Habayit Hayehudi's Minister Uri Ariel and MKs Ayelet Shaked and Shuli Moalem joined the demonstration in defiance of the PM, who hinted his displeasure with their party's criticism of the relase earlier on Monday and said: ""The moment the decision was passed by the government, all its members behave responsibly."

The release of the 26 Palestinian prisoners was approved by the government, which previously okayed the release of 104 prisoners in four batches, as part of the resumption of peace talks with the Palestinians. Demonstrators formed a human chain in front of the prison's wall and chanted "Jewish blood isn't forfeit," and called on the Habayit Hayehudi minister to resign their posts. 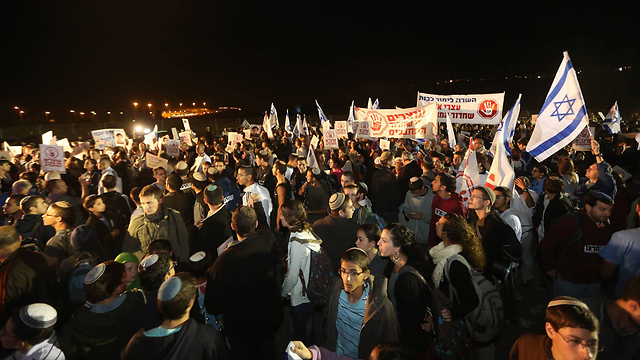 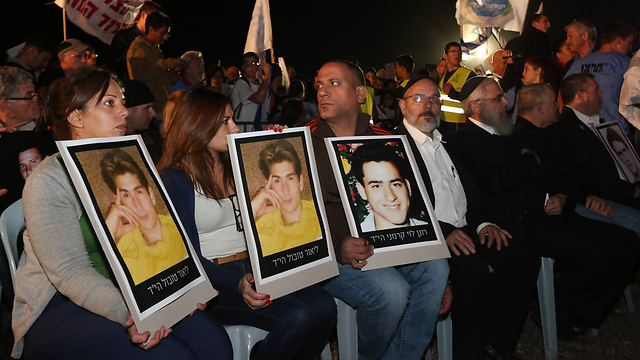 At the demonstration, Minister Uri Ariel said: "We'll return to Judea and Samaria, we'll return to the Jordan Valley, we'll build in Jerusalem and in Shilo and everywhere. No one can drive the Jewish nation out of its land. The Shamgar Committee recommended against releasing prisoners. Why doesn't the government adopt the report? Releasing prisoners isn't according to Jewish values."

Ariel added: "We say here to the world: From the Jordan River to the sea there'll be only one state, Israel. We'll fight to give full security and that no terrorists will be released. This people deserve that not even one stone will be thrown in Jerusalem. Enough with terror, enough with terrorist release." 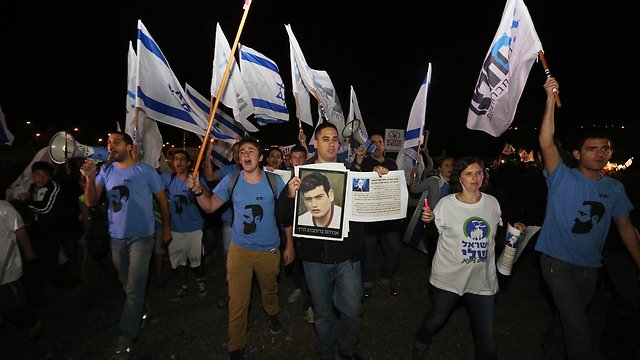 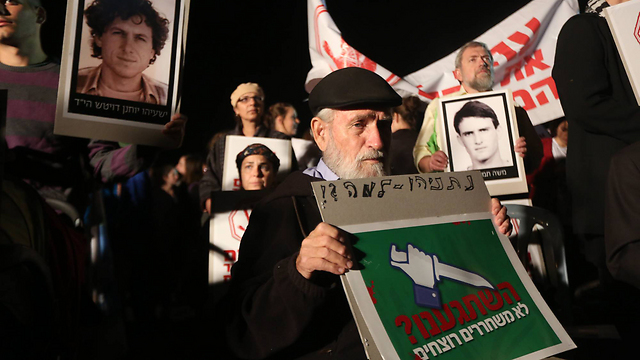 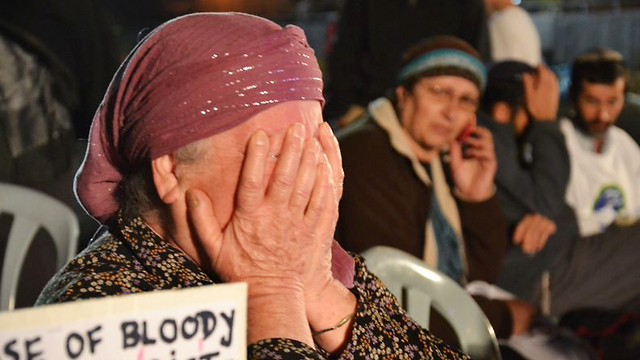 Some protestors carried photographs of their relatives killed in Palestinian attacks. Some hoisted signs reading "stop the release of the terrorists," and "halting terrorists' release."

Gila Molcho, sister of Ian Feinberg who was killed in the Gaza Strip, said in a speech: "A red line has been crossed. My brother believed justice lies with people, but a great wrong has been done here. His first murderer was released in the course of the Shalit deal, his second murderer was released on the first batch and the third will be released tomorrow."

In tears, she addressed the crowd: "How can a family be crushed like this? We're not a goodwill gesture, we're the people of Israel. The PM must wake up – we're giving a horrible message here."

The Israeli government published the list of Palestinian prisoners to be released, following a fiery debate in the Ministerial Committee for Legislation over the Struck Bill aimed to block the releases. The prisoners to be released were jailed due to crimes performed before the Oslo Accords, and served time ranging between 19 to 28 years. 21 prisoners are from the West Bank and five are from Gaza. The list of prisoners was posted Sunday night on the Prison Service's website. Bereaved families' relatives severely criticized the government. Orna Amrani, sister of late Akiva Sha'altiel, whose killer is set to be released, explained her feelings to Ynet: "This is a stone which suffocates me all day. It's a horrible feeling." She said the State is paying a heavy price for the peace process. "I lost fate in my country. My country betrayed me. My brother's blood was spilled for nothing." Immediately after the list of prisoners to be released was posted, impromptu celebrations started at the houses of their relatives. Dozens of residents of the Daheshia refugee camp in Bethlehem arrived at the home of the parents of Issa Abed Rabbo, most veteran of the prisoners on the list, convicted of the murder of Ravital Seri and Ron Levi near the Cremisan monastery south of Jerusalem in 1984. Abd Rabbo's mother told Ynet that despite her son's long years in jail, she finds it hard to wait until Tuesday. "I'm joyful. I want to thank god and Abu Mazen for the tidings."