Protest against prisoner release: 'Your death was in vain' written near graves

Members of the group Sorry We Forgot placed signs next to dozens of gravestones of fallen IDF soldiers in Mount Herzl's military cemetery late Monday night. The signs read "Sorry we forgot – your death was in vain" and were signed by "the Israeli government". The small signs were removed after they were photographed.

Members of the group claim they seek to create a dialogue and address the terror victims, who according to them "were forgotten by the government, which chose to release their murderers."

Sources within the group said Tuesday morning that "it is a movement of people from the left, right and center wings who are tired of the Israeli government's indifference. The group aims at creating a public discourse; we know that placing the signs is an act designed to shock and it achieved its purpose. The release is painful for everyone and some of us are bereaved families."

The chair of the Yad Labanim organization, Eli Ben-Shem, said the protest act is not legitimate. According to him, "this is an act of cowardice. This is a serious incident, red lines were crossed and they put the entire bereaved family into this battle. It is shameful and damaging to the memory of the fallen and a desecration of their graves."

Ben-Shem further noted that they turned to the police commissioner on the matter. "We ask to investigate the desecration of graves, which may carry prison time. It is time to put this to the test of reality. This occurrence must be end." The Jerusalem District Police said the matter is under investigation. 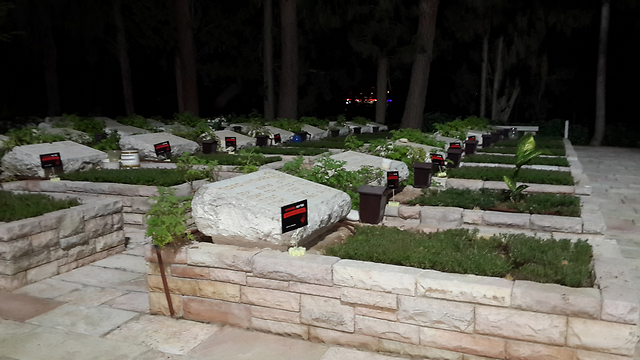 Mount Herzl, Tuesday morning
Barring last minute changes, on the night between Tuesday and Wednesday, 26 Palestinian prisoners are set to leave Ofer Prison on their way to freedom. Some 3,500 people joined a protest Monday night against the release of the murderers. Minister Uri Ariel, who attended the protest, said: "We will return to Judea and Samaria, return to the Jordan Valley, build in Jerusalem and Shilo and anywhere else. No one can expel the Jewish people from their land. The Shamgar Committee recommended against releasing terrorists. Why doesn't the government accept the report? Releasing terrorists is not a Jewish value."

Ariel added: "We say here to the world: From the Jordan River to the sea there'll be only one state, Israel. We'll fight to give full security and that no terrorists will be released. This people deserve that not even one stone will be thrown in Jerusalem. Enough with terror, enough with terrorist release."