Prior to tax, pensions, poor are in great shape in relation to global situation. After – picture changes completely. Taub Center report says one fifth of Israel’s elderly live below poverty level – seven times more than in most developed countries

Death of the Israeli welfare state: poverty rates among the elderly in Israel are the highest in the developed world, with a huge margin in comparison to most countries. This is according to a new study by the Taub Center for Social Policy Studies in Israel published Tuesday. The research conducted by the center's executive director, Professor Dan Ben-David, and researcher Haim Bleikh, shows that based on their disposable income (after welfare payments, national security benefits and taxes), 21% of Israel's elderly live below the poverty line.

This is the highest poverty rate in the developed world based on disposable income, in relation to the median which stands at 3.5%. The disturbing number is even more alarming due to the fact that the rate of persons aged 65 and older in Israel is the lowest among OECD countries.

The authors, who examined the data from the middle of the previous decade (the most recent which can be compared to international indices), point to even more alarming figures: 50.2% of the elderly are below the poverty line when measuring their market income alone (prior to welfare payments and taxes). This is the lowest poverty rate based on market income in the developed world, similar to the situation in Canada. Since then, the situation has not changed, researchers say. 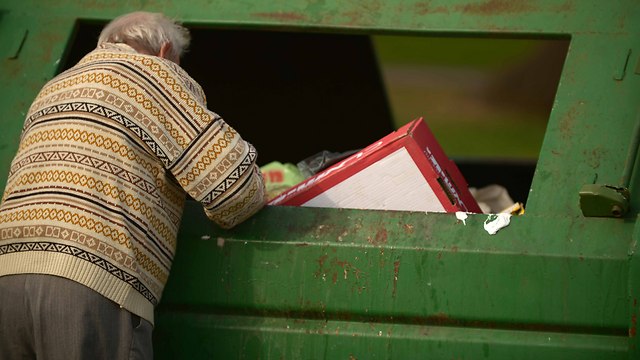 Illustration (Photo: Avi Roccah)
They note that "although the welfare and pension policy is aimed at encouraging economic independence of older ages, they are not effective in reducing the inequality among the elderly in relation to the developed world.”

Professor Ben-David explains that the government’s activity to assist the elderly is what led to this situation, "The issue of poverty among those aged 65 and older, which is considered retirement age in most countries is probably the most prominent example of the inefficiency of the tax and welfare system in Israel in regard to alleviating poverty," said Ben-David.

He added, "In a sense, the problem of poverty among the elderly in Israel is much less severe than in the rest of the world, but after various governments have taken actions to improve the situation of the elderly, the situation is reversed and we rise to the top of the table in the Western world."

'No one cares about us'

The report's findings led to angry responses from social organizations and MKs. "The data are horrific, but it comes as no surprise," Rabbi Yechiel Eckstein said. "A quarter of Israel's elderly depends solely on State stipends at a lack of a better pension agreement. The maximal stipend an elderly individual is eligible for is 2,700 NIS (roughly $766) a month, which is not enough to cover the most basic needs," the rabbi said. "The result is thousands of elderly people living in appalling poverty."

He added that "The State of Israel must care for the elderly and give proper stipends to those who depend on it completely."

Haim Turgeman, 79, lives in a small apartment in Jerusalem with his disabled 50-year-old son. His wife is institutionalized following brain damage she suffered, and his two other children "Can barely keep their heads above water to take care of their own children," he said.

"We have to pay bills, electricity, water. I take clothes from my son and don't buy medication because there's just no money. This is not the State that used to respect its elderly," Haim said. "They forgot about us, and threw us under the bus, and no one cares about us, in the public or the government."

Dire results – due to politics

Professor Ben-David argues that local politics play a dual role in creating these results. “The portion of the elderly from within the total population of poor in other developed countries is significantly higher than in Israel. Therefore, when these countries institute relief programs designed to reduce poverty in terms of available revenue, it is not surprising that they tend to focus on reducing poverty among the elderly," explains Ben-David, adding that this is because within these countries there is a "greater impact per dollar or per euro."

The second aspect of the political dimension, stressed Ben-David, is that the demographic of the elderly in Israel "plays against them." "Elderly populations in other countries constitute a larger part of the electorate. They manage to channel political power toward welfare policy, nearly abolishing poverty among the elderly in most countries."

As Ben-David and Bleikh note, the elderly in Israel had a short period characterized by increased political influence between the rise and fall of the pensioners' party, but it was quite limited.

In summary, Ben-David notes that the Israeli social safety net, which has a goal of redistributing resources via welfare payments and taxes, is much less effective that the safety nets of other developed countries when it comes to reducing poverty and the inequality within disposable income. "This is a serious problem in Israel in general, but its severity is especially high among the elderly," warns the director of the Taub Center.

The poverty rate in economic revenues among those aged 65 and over in Israel is one of the lowest in the developed world and is even decreasing. However, the poverty rate in disposable income for this age group is the highest among developed countries, which is another difference from the other countries," says Ben-David.

Most of this population has passed the age at which they can work," says Professor Ben-David. "They are totally dependent upon the system to keep them above the poverty line. This system let them down in Israel more than any other country.”