Dozens of bereaved families, represented by Almagor group, filed appeal to High Court against second round of prisoners' release Tuesday night. 'We must follow through with our commitment', justices say

The High Court rejected on Tuesday the appeal of the Almagor group and bereaved families against the release of 26 Palestinian prisoners, scheduled for midnight between Tuesday and Wednesday, as part of the second round of releases agreed upon in the renewed talks with Palestinians.

The justices agreed that the hearing under the time pressure is problematic, and asked the State representative if the release date is at all flexible. The State responded that "The government committed through the Americans that at the beginning of the fourth month of negotiations – which is today – the second round of releases will take place. For security reasons, there is a need for the transfer and release to happen during nighttime. Therefore, we must follow through with our commitment." 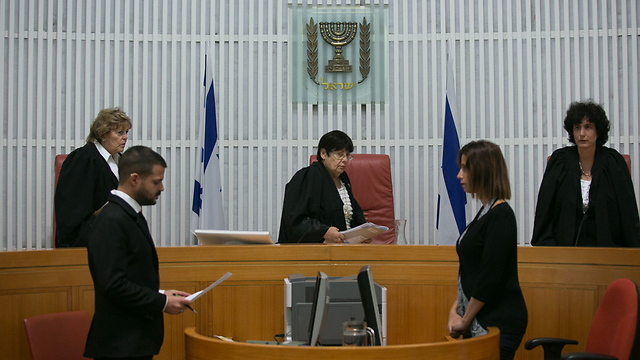 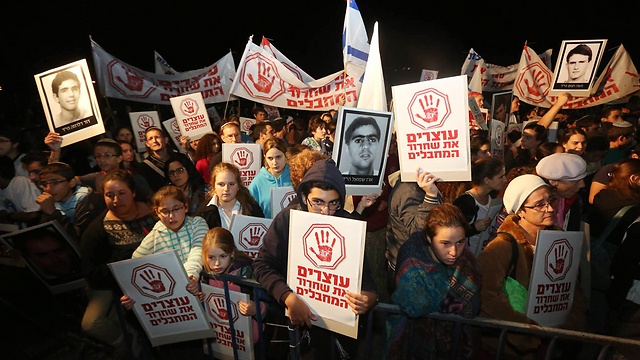 Apparently, due to the tight schedule, family members of prisoners meant to be released Tuesday night were not present at the hearing.

According to the appeal, "Releasing murderers with blood on their hands, even for diplomatic needs, is immoral and a crucial injury to a society founded on values of morality and law."

Ortal Tamam, niece of Moshe Tamam who was murdered by a terrorist group in 1984, said: "I have no legal reasons, but I know what justice is, and I ask the High Courtof Justice to promote justice. You don't always have to look at the pages, but rather at the picture, and the picture shows that 26 terrorists who murdered intentionally will be released today. I was raised for peace, not war, but this is not peace."

Attorney Naftali Wertzberger, who is representing the families, added: "The schedule is superficial. There is no particular sanctity for tonight at midnight. The court shouldn't stray from schedule on issues that regard the very core of the tenets of the State. These claims deserve more than two hours' worth of review. "These are murderers of children and elderly by horrific means. The cost is not someone who stole a car or is suspicious of being related to a terrorist group, but hard core terrorist. That's why this is the moment of truth."

Due to the tight schedule, the plea was not responded to in writing. The State representative opened the hearing claiming the appeal must be rejected since it has no cause for intervention in the government decisions.

She said that the decision of the release was made as part of negotiations, and Palestinian commitments crucial to Israeli interests were made.

The State rejected the appeal's claims that with renewed terror and resistance to the release by certain ministers, further hearings must be made.

Regarding the latest terror incidents in Israel, the State claimed: "On the factual level, recent events are under investigation and their background remains unclear." Furthermore, the State added, similar pleas were rejected in the past.

Raanan Ben-Zur contributed to this article