According to Legatum Institute's index, Israel ranks high on education, community, low on trust in government, employment; world's most prosperous state is Norway

The London-based Legatum Institute has issued its latest "Prosperity Index," once again placing Norway first in rankings that aim to reflect overall wealth, health, and happiness.

The prosperity index is made up of several categories, calculated from surveys answered by citizens of states in the index. In a few of those categories, Israel is on top of the list; in another two it's deep in the bottom. Israel is ranked 25th in education, 8 places up from 2012. In economy it ranked 32nd, 31st in entrepreneurship, 28th in government, and 33rd in health. 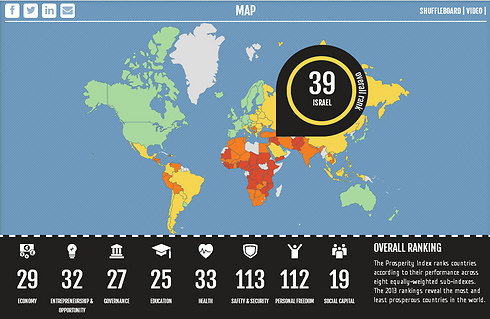 
The State ranked 19th in social capital. A bleak 113th in security and 112th in personal freedom dragged it to its lower general ranking.

Still, Israel ranked 3rd in the Mideast – after the United Arab Emirates and Kuwait and ahead of Saudi Arabia and Morocco. Jordan, Turkey, Lebanon, Egypt and Syria are much lower on the list, and Iran ranked in the 101 place.

However, percentage of employed people is lower than the world average. Israel's survey answers indicate citizens' distrust in the State: Only 36% have faith in the government, and only 14% are pleased with its effort in fighting poverty.

Only 42% of Israelis said they had trust in the financial system, as opposed to 52% in the world. A lower percentage trusts the judicial system, as well.

Only 41% of Israelis believe it is a good place for minorities. 53% said they've donated to charity in the past month, twice as much as the world average, and a whopping 90% believe they can count on their friends and family in times of trouble.

It is the fifth year in a row that the Norwegians garnered the first place. Switzerland came in second this year, Canada in third, Sweden in fourth, and New Zealand rounding out the top five. The United States was ranked 11th.

The head of the Legatum Institute, Jeffrey Gedmin, said that over the past five years, "the world has seen a continuous increase in prosperity, with citizens in many countries experiencing improving wealth."

Legatum credits the increase to improvements in entrepreneurship, health, and education.