An Obama administration official confirmed to CNN Thursday night that Israeli warplanes struck a military base near the Syrian city of Latakia.

The target, according to the Obama administration official, was missiles and related equipment the Israelis felt might be transferred to Hezbollah. The official declined to be identified because of the sensitive nature of the information.

The attack has not been confirmed by the Israeli government.

Earlier Thursday, the Al-Arabiya network reported that Israel attacked in Syria twice Wednesday night – near the port city of Latakia and in the capital Damascus.

A Syrian news website reported that a missile fired from the Mediterranean hit a Syrian missile base near Latakia, but Al-Arabiya's report was the first on an alleged attack in Damascus.

Sources quoted by Al-Arabiya said that in both attacks missile shipments were completely destroyed. According to the report, the attacks targeted SA-8 missiles which were meant to be transferred to Lebanese Shiite group Hezbollah.

The report on the alleged Israeli attack launched Wednesday night was published by Syrian website Dampress.com, which quoted eyewitnesses as saying that there were no injuries in the explosion but severe damage was caused to a base located near Snobar Jableh, south of Latakia. The Syrian Observatory for Human Rights also reported of a blast in an air defense bases in the same area. On Wednesday, Lebanese press reported that Israeli Air Force jets circled over south Lebanon. In July it was reported that a "foreign army" attacked in the Latakia area a stockpile of Russian-made Yakhont anti-ship cruise missiles belonging to President Bashar Assad's forces. The Yakhont missiles have a range of 300 kilometers and are considered very accurate. Syrian state-owned media outlets have yet to respond to the reports on the alleged strikes, and a Syrian security official denied the reports altogether. 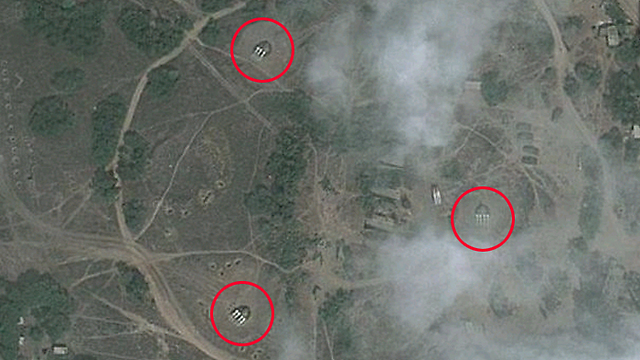 Anti-aircraft missile batteries in base near Latakia (Photo: Google Maps)

In an interview with Arabic-language Russia Al-Youm, Syrian official Amar al-Assad said: "We in Latakia did not hear any blast. The media outlets that are the source of these reports may have dubious intentions that serve the interests of the enemies."

MTV Lebanon quoted "sources in Jerusalem" as saying that Turkey was behind the attack on the air defense base near Latakia. According to the report, which was not confirmed by any other source, the attack came in response to the downing of a Turkish fighter jet a few months ago.

Ynet's military analyst Ron Ben-Yishai stresses that regardless of the veracity of the Al-Arabiya report, Syria consistently tries, apparently these days as well, to transfer ground-air missiles to the hands of Hezbollah. Hezbollah members have already trained in operating SA-8 anti-aircraft missiles with the Syrian air defense forces near Damascus.

There were attempts in the past, which some were successful, to transfer such missiles to Hezbollah in Lebanon. An unknown number of such anti-aircraft missile batteries are already in the country.

The SA-8 is a fairly outdated missile that was already in use by the Syrian army in the 1980s. This is a portable missile, that operates on one vehicle, on which a detection radar is also installed, together with the missiles and another radar for fire control that aims the missile to its target. This vehicle, which runs on caterpillar tracks, can rapidly change location with hardly any preparation for the firing itself. It travels, stops – and fires. Since its dimensions are small, it is very easy to conceal it and thus very difficult to uncover and attack it. Immediately after the missiles are launched, the radar is turned off and the radiation cannot be tracked.

The SA-8 hit and shot down an Israeli Phantom jet in Lebanese airspace during the First Lebanon War in 1982.

The most important factor is that the Russians sold Syria heaps of the renewed and more dangerous model, the SA-17, a missile that is even more difficult to expose, its range is longer, it is more precise and can employ several targets at once. This missile is a strategic weapon in the hands of the Syrians, even more so if they manage to transfer it to Hezbollah, as they have tried relentlessly for some time.

If the reports regarding attacks in Syria on Wednesday prove true, it may be that they were carried out in order to prevent the transfer of such portable missiles to the hands of Hezbollah, and perhaps also in order to punish the Syrians for transferring, and attempting to transfer, these anti-aircraft missiles to Hezbollah.