An IDF force operating on both sides of the Gaza border fence was hit after a bomb went off on Thursday night. One soldier was seriously injured, another moderately injured and three sustained light wounds.

The soldier who sustained the most serious wounds has been put on a respirator machine and has undergone surgery for injuries to his face and eyes. He is in stable condition but will likely require additional face reconstruction surgeries.

The other wounded soldiers suffer mainly from lacerations and burns that were caused by shrapnel.

It was initially believed the troops – Engineering Corps soldiers backed by Golani Brigade combatants – were hit by mortar fire but it was later revealed that they were hit by an explosive device. The five men, including two officers, were taken to the Soroka Medical Center in Beerheba. The troops were at the scene as part of the efforts to uncover additional parts of an underground terror tunnel that was located in the area a month ago.

The force returned fire. Palestinian sources reported that an IDF tank opened fired at a terror cell belonging to Hamas' armed wing - the Izz al-Din al-Qassam Brigades, which was situated east of the city of Khan Younis in south Gaza. 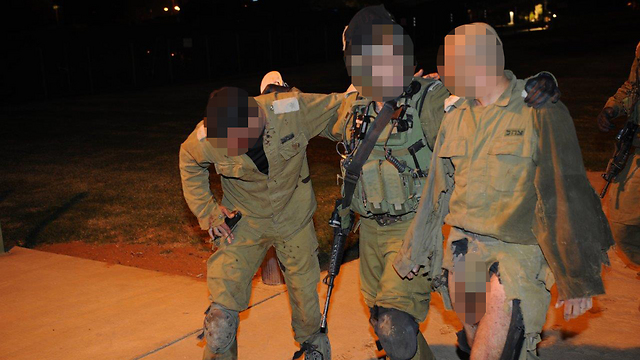 Soldiers injured in incident help one another (Photo: Herzel Yosef) 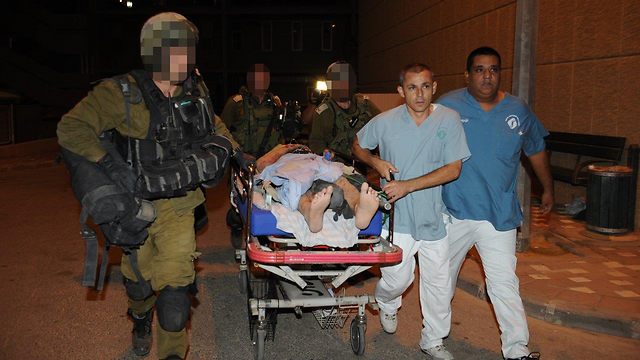 On Friday morning sources in Gaza reported that three members of Hamas' military wing were killed in an IAF strike in the southern Strip, east of the town of al-Kharrara.

According to the Palestinians, the incident followed the limited entry of IDF forces into Gaza, near the border fence, but Israeli officials said the forces operated beyond the security fence but still within Israeli territory. 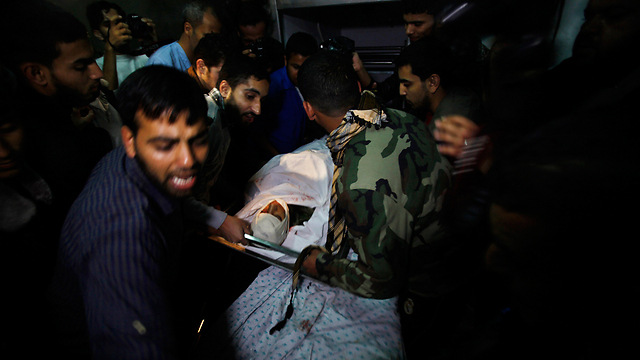 The IDF recently uncovered in the Abasan area a 1.5-kilometer long tunnel that stretched from Gaza to the fields of Kibbutz Ein Hashlosha. The tunnel was meant to facilitate a complex terror attack involving an assault on soldiers or civilians.

Earlier this week the rocket fire on south Israel resumed after nearly a month of calm. Two rockets were fired from the Strip in the early hours of Monday morning. One was intercepted by the Iron Dome air defense system. The IDF retaliated a few hours later by attacking rocket-launching pads in north Gaza.

Despite protests, IDF security details for the 13 Gaza-vicinity communities were officially terminated on Thursday morning, as soldiers left their posts and turned over authority to the local residents.

Residents of Netiv Ha'asara demonstrated against the move on Wednesday, but on Thursday held an emotional farewell ceremony for the departing soldiers.