US to provide Israel with 6 V-22 Osprey aircraft

The United States will provide Israel with six 22 Osprey aircraft as part of its military aid, Defense Secretary Chuck Hagel announced at an Anti-Defamation League conference in New York on Thursday.

The tilt-rotor aircraft were used by the US military in Afghanistan.

Hagel said the delivery would be "expedited," meaning "Israel will get six V-22s out of the next order to go on the assembly line, and they will be compatible with other (Israeli defense) capabilities." 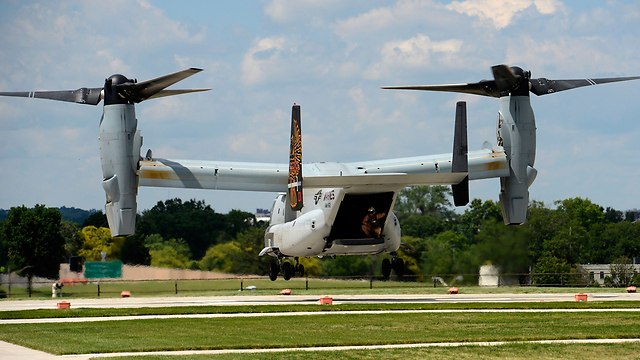 According to NBC, Israel could get the unique aircraft — which takes off and lands like a helicopter but flies like a jet — within as early as two years.

A senior Pentagon official told NBC News that Israel, facing threats from Iran and Syria and instability in the Sinai Peninsula, requested the Ospreys this week.

The Pentagon agreed to reallocate the next group of aircraft to come off the production line, which had been previously assigned to the Marines, to meet the order, the official said.

The aircraft is not likely to replace the Israel Air Force's line of helicopters.

The deal was negotiated between Hagel and Defense Minister Moshe Ya'alon during the former's last visit to Israel. One V-22 Osprey's estimated cost is $69 million.