Ya'alon: Hamas preparing for next round of violence

Defense Minister Moshe Ya'alon on Sunday visited the five IDF soldiers who were injured in Thursday's Gaza border incident. "We are concerned about the tunnel phenomenon," he said upon leaving the Soroka Medical Center in Beersheba.

"Hamas sees it as a way to lay infrastructure for terror attacks. We consider Hamas, which is engaged in digging and controls Gaza, as responsible. Calm will be met with calm."

He further added, "Any provocation will be met by a tough response on our part. There is no connection between what is going on in the Gaza Strip and the negotiations with the Palestinians. Hamas is deterred and therefore maintains calm, but is preparing itself for a resumption of violence in various means. Tunnels are part of its preparations." 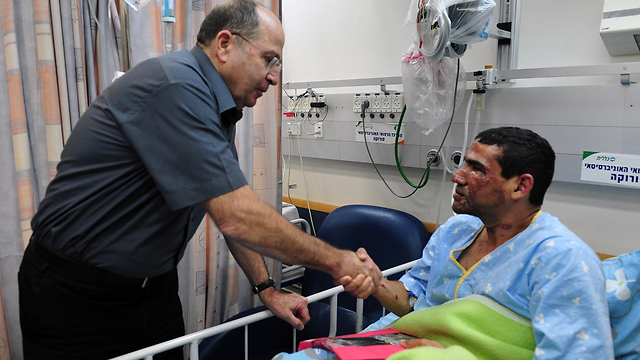 On Thursday night, five soldiers from the Engineering Corps and the Golani Brigade working to expose tunnels on the Gaza border were injured.

Soroka Medical Center director Dr. Ehud Davidson said that Second-Lieutenant Ahiya Klein, who was seriously injured, is no longer in a life threatening condition. He suffers from burns and his eye-sight has been affected. He could not provide an accurate prognosis but noted that the other wounded are doing well.

Following the explosion, the troops detected a Hamas anit-tank cell a kilometer from the fence, inside Gaza territory. They opened fire and killed one terrorist. Troops then destroyed part of the tunnel and later bombed another part, killing three tunnel and rocket experts.

Later, a mortar shell landed in an open area in the Eshkol Regional Council. No injuries or damage were reported.