With 55 supporters against 11 opposed, Knesset passes bill which prohibits marriage among minors, to haredi MKs ire, who accuse bill's initiators of 'close-mindedness'

Following a fiery debate, the Knesset raised the legal marriage age from 17 to 18 on Monday. The bill, initiated by a group of Knesset members from across the political spectrum, was meant to fight the early betrothal customary in certain sectors, where minors are wed under familiar and community pressures.

The bill passed with the support of 55 MKs against 11 opposed.

The bill's initiators, Coalition Chairman Yariv Levin (Likud -Beiteinu), Meretz Chairwoman Zahava Gal-On, MK Dov Khenin (Hadash), among others, stressed that the early marriage phenomenon must be fought, and that Israel should allow marriage only between adults, like in most Western countries. 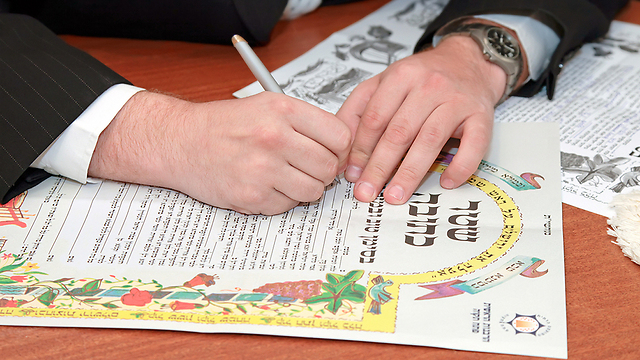 During the Knesset debate preceding the vote, Haredi MKs voiced their ire with the bill and accused its initiators of close-mindedness: "This Knesset, which presumes to be open and innovative, will outlaw two youngsters to marry at 17," said MK Eichler (United Torah Judaism).

"Is this open-mindedness? In a world where almost everything is allowed, you can't raise a house and family?" Eichler suggested that if in certain cases there are concerns a girl was married against her will, it can be put into law that a social worker will recommend not to allow the marriage.

MK Nisim Zeev also took the podium and took a provocative stance: "If you want to fight something, fight the phenomenon of Arab men who date Jewish women. This is far more worrying than a couple who wish to build a home in Israel."

MK Gal-On answered the bill's detractors and said: "Do you really think that a 17-year-old minor knows what she wants at that age? In what country are we living?"

According to Gal-On, "premature marriages' primary victims are young girls, whose families marry them under duress, thinking that the natural place for a woman is at home, and her role is limited to giving birth and raising children.

"The new law will lead to women marrying out of their own will and with full understanding of the consequences of marriage."

MK Khenin, who also initiated the bill, called marriage between minors an "attack on human rights." According to him, "this law is an important message to Israeli society. All traditions can and should exist in a framework which respects human rights, women rights and children rights."

Marriage age around the world

By raising the marriage age to 18 Israel is joining most European countries. However, in some, like Austria, Bulgaria and the Czech Republic, the minimal age is 16, though parental agreement is required.

In Germany, marriage at 16 requires the court's approval as well. In Italy, the court's green light is enough for two to marry at 16. In the United States, the marriage age varies from state to state.

In many Asian countries the minimal marriage age is different for men and women. For instance, in Afghanistan, Pakistan and Iran men are allowed to wed at 18, but women at 16. In Kuwait the marriage age is 17 and 15, respectively.

In Syria, the court may allow girls as young as 13 to marry.