17-year-old wives: Law passed too late for us

A new law passed by the Knesset on Monday that permits marriage starting from the age of 18 is not impressing Hasidic members of the haredi public and several groups with the Israeli-Arab sector in which underage marriage is quite common. In many such communities, there are couples who tie the knot before their 17th birthday – the minimum age before the new law.

According to Hasidic custom, the sons of distinguished rebbis marry even earlier in order to minimize the time frame between puberty and their wedding, and to prevent young males from inappropriate thoughts or worse – sinful deeds.

The legislation is not expected to raise the minimum age for marriage in those communities, as they already ignore the existing law. The ceremony at underage marriages in these communities is conducted privately by rabbis who do not report the event to the authorities. The registration for the wedding is completed at a later date, when both the bride and the groom reach the legal age.

N. (25), from the ultra-Orthodox neighborhood of Mea Shearim in Jerusalem, was 18 when he married a 16.5-year-old girl – as common in his community – and though he divorced her two years later. He does not believe the law can be enforced.

"I was born to non-Orthodox parents who went on to rediscover their religion. In those years, I was imbued with conflicting and confusing messages so that I was unsure of my identity at the time of my wedding. I did it without thought, I succumbed to peer pressure, and it is obvious that people like me, who feel unstable, should not marry at an early age."

According to N., certain communities host wholesale marriages of teenagers who engage in forbidden relationships; their rabbis present them no choice; they must marry with or without their parents' permission. 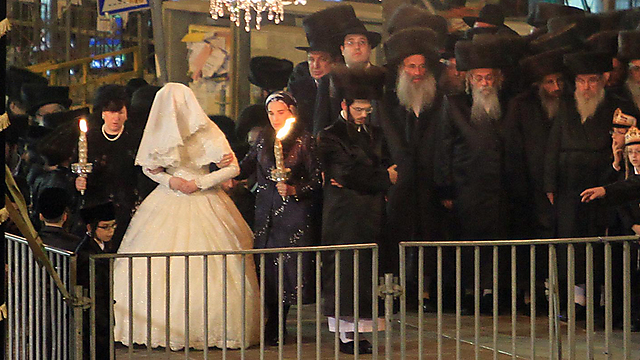 He added, however, that "a Haredi yeshiva student who grew up in a secure home and lived a good life without falling into the pitfalls of other adolescents, I do not see a reason why he shouldn’t marry at the age of 17 or 18, even if for others it is not a stable time."

Nevertheless, he believes changing the law will not make a great difference, as "there are rabbis who do not consider the law at all. They do it today and they will continue to do it. They give unofficial documentation of the marriage until the couple is 18. It's not a problem and the legislation (from Monday) will not affect this."

Yisrael Meir Hirsch, one of the leaders of the extremist Neturei Karta – a Jewish sect which opposes Zionism and calls for the dismantling of the State of Israel – dismissed the raising of the minimum age for marriage, and declared that his family members, as well as members of his community who customarily marry minors, will not be dissuaded by the new law. "No one can limit us – only the Torah," he said, "Anyways the whole of Zionist law is worthless in our eyes; why should we listen to this one?"

According to Hirsch, the only significance to the new law is that couples who ignore it will not be able to register at the Chief Rabbinate and the Interior Ministry.

A.D., a haredi resident of Jerusalem, married at the age of 16 and two months. She became a mother a few days before her 17th birthday – even though she and her husband did not belong to the Hasidic communities in which the custom is observed. "Our story is complicated, but I can say that at the time it was the best decision for me," she said. "I was ready, with the maturity of a 20-year-old woman."

She similarly dismissed the new legislation: "The law does not matter for our public. Those who obey the custom based on ideology will find ways to evade the law. I married illegally, even though it was not due to ideology."

"I don't know if it's for everyone, but for me it was right, in the state I was in at the time," she said. "Today, with the worries of a mother of four, I wouldn't let them do it. At 19, I had two kids, and I can't see them succeeding with the challenges I faced."

Yet, she does not express regret: "I earned the most beautiful years that I could. I shouldered a heavy burden, but it was the most fun in the world."

Young women in the Arab sector believe the law should have been passed a long time ago. For Miriam, a resident of Wadi Ara who married at the age of 17, the new law came too late: "I would have wanted this law to pass before my wedding because I did not want to build a relationship at such an age, but my family pressured me and forced me to marry, without any consideration for me or my future."

Ranin, a 17.5-year-old girl from the Triangle – a concentration of Israeli Arab towns adjacent to the Green Line – is to be married in three months: "I chose to be engaged at a young age. These days I am preparing for my wedding and I hope the new law doesn't pass until after the ceremony. If not, we will have a problem."

A western Galilee resident who married at the age of 16.5: "I am pleased to hear about this new law that prohibits minors from marrying. It should have happened long ago. I was married at a very early age. I thought I had a good life, but everything crumbled. That step cost me heavily, and I am still paying the price to this day." She said. "It's hard for me to believe there is a woman out there who married at such an early age and is satisfied."

Aaliyah, also from northern Israel, married at 17: "I didn't want to, but my family made me – and I married a man I didn't love."

The deputy-chair of the Islamic Movement's southern branch, Sheik Safot Frej, is not concerned with the changes in the law: "Despite the new law, Islamic faith dictates the possibility of marriage for a minor. The sheik relies on witnesses from both families who ask the couple if they agree to marry. If they do, they can be married." Ferj noted that "this does not mean that we support underage marriage, because the bride must be prepared to handle the relationship correctly. In no other way does religion prohibit a minor from marrying."

Catching up to Europe

By raising the minimum age for marriage to 18, Israeli law comports with the larger European community. However, a number of European states (like Austria, Bulgaria, and the Czech Republic) set the minimum age at 16, even though a wedding at this age requires permission from both parents and one partner above the age of 18.

In Germany, if the court agrees and the parents permit, the law allows teenagers to marry as early as 16. In Italy, only a court order is needed for a 16 year old to marry. In the United States, the age at which a couple may marry varies from state to state.

In many Asian countries the minimum age differs for males and females. For example, in Afghanistan, Pakistan, and Iran men may marry starting at 18, while women may begin at 16. In Kuwait the minimum age is 17 and 15, respectively. In Syria, a court may allow 13-year-old girls and 15-year-old boys to marry.