After 17 years of allegations, Avigdor Lieberman has been acquitted of charges of fraud, breach of trust, paving way for his return to Foreign Ministry. 'I don't want to dwell on this issue anymore; I want to put this chapter behind me,' Lieberman says

After 17 years of allegations, MK Avigdor Lieberman has been acquitted of charges of fraud, breach of trust, thus paving the way for his return to the Foreign Ministry.

"I want to thank the court," a jubilant Lieberman said after receiving the much anticipated verdict which signaled his return to government as Foreign Minister. "After 17 years (of investigations), it is behind me... I don't want to dwell on this issue anymore; I want to put this chapter behind me and look forward to the challenges ahead."

Prime Minister Benjamin Netanyahu on Wednesday welcomed the acquittal of Avigdor Lieberman on corruption charges and hailed his anticipated return to government as Foreign Minister. "I congratulate you on your unanimous acquittal and am happy about your returning to the government so that we can continue working together for the good of Israel," Netanyahu said in a statement. 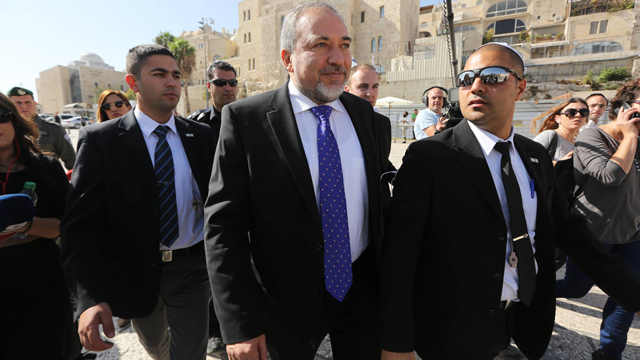 Following his acquittal Lieberman went to the Kotel where he said a prayer. 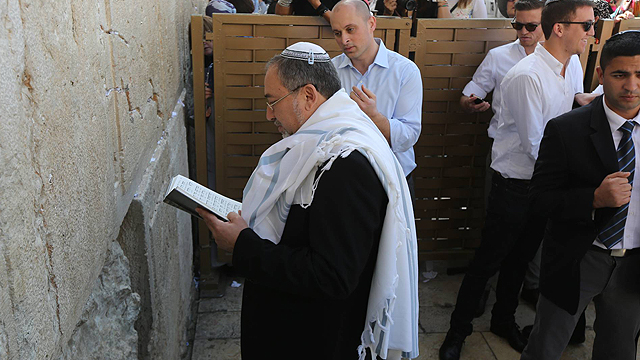 Economy Minister Naftali Bennett also commented on Lieberman's acquittal, saying: "I congratulate Avidgor Lieberman for his unequivocal acquittal. This ruling comes after too many years of legal torture. I am happy Lieberman will return to the Foreign Ministry, now we can return to cooperation and he will be able to continue to contribute his abilities to bettering Israel."

Defense Minister Moshe Ya'alon responded to the verdict and said that he congratulates Lieberman “on the unanimous acquittal at trial and on his return in full to the diplomatic and political system, the face the challenges with which the State of Israel deals."

Finance Minister Yair Lapid also responded to the acquittal: "Warm wishes to MK Avigdor Lieberman on his acquittal in court."

President Shimon Peres called Lieberman to congratulate him on his acquittal in court. The president told Lieberman that he welcomed the acquittal, and was very sorry for the suffering Lieberman experienced. Lieberman thanked Peres and said that they would return to cooperate and reinstate their weekly meetings as president and foreign minister.

Shas chairman Aryeh Deri said "I am happy for my friend and congratulate him and his family on the absolute acquittal after all the suffering they experienced in recent years." 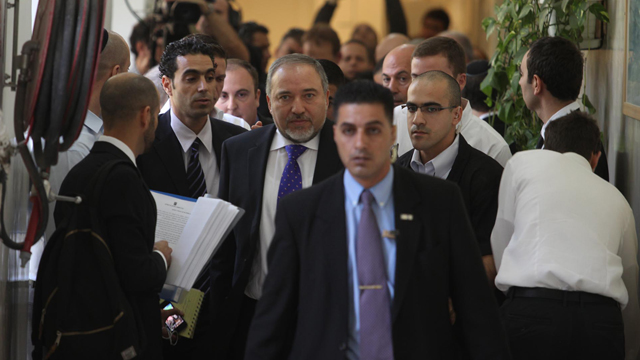 However not everybody was as pleased. Opposition leader Shelly Yachimovich who is highly critical of Lieberman said "Public corruption is no less severe than criminal corruption. I call on the Attorney General to order the prosecution to appeal."

Meretz Chair Zahava Gal-On said "We must respect the court's decision, while checking the conduct of Attorney General Yehuda Weinstein.

"In opposition to the state prosecutor and other senior lawyers, Weinstein preferred to file an indictment against Lieberman over something that was relatively marginal, while closing the severe corruption charges against him.”

Lawyer Nati Simhoni, who served on Lieberman's defense team, told Ynet that "the Attorney General Yehuda Weinstein should not resign (because of the acquittal). He took an educated decision (when he decided to file the indictment)."

Simhoni added that "the court reportedly stressed that there was not criminal behavior. The time has come to put this story to an end."

The political system was holding its collective breath in anticipation of the verdict. However, the acquittal does not necessarily bode well for the collation.

An initial hint at possible ramifications the verdict will have Internal Security Minister Yizhak Aharonovitch (Yisrael Beiteinu) told Ynet "I believe that in the upcoming days he will return to the position of Foreign Minister. We at Yisrael Beiteinu need to decide whether we want to stay with the Likud or diverge. The merger caused Yisrael Beiteinu damage."

Lieberman was accused of having appointed Ben Aryeh to the post of a councilor in the Foreign Ministry and not preventing and even actively promoting Ben Aryeh's appointment to the post of Israeli ambassador in Latvia in 2009, all while being aware that Ben Aryeh, who served as ambassador in Belarus, illegally gave Lieberman official information regarding an investigation Belarus was conducting against Lieberman. 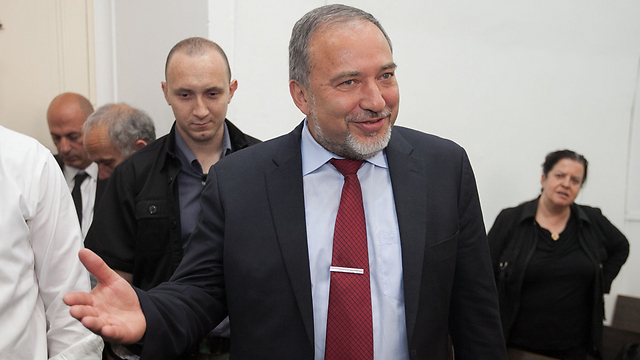 Lieberman in court (Photo: Ohad Zwingenberg)
An acquittal for Lieberman allows him to serve in any public role; this would alsohave been the case even if he was convicted without moral turpitude. A conviction with turpitude would have forced him to resign immediately from the Knesset until the next election.

The acquittal will give Lieberman political strength that will allow him to return to the forefront of the political stage. Lieberman has been keeping a low profile lately, cautious of causing any political unrest. If he is acquitted, he could become available to truly meaningful political moves, such as winning over the right-wing public again and leading an aggressive policy with the Palestinian Authority, Turkey, and any other country Lieberman himself defines as hostile to Israel.