As talks flounder, US to give $75 million more in aid to Palestinians

Amid rumors of the collapse of peace talks, US Secretary of State John Kerry announced the US would give an additional $75 million in aid to create Palestinian jobs and help the PA improve roads, schools and other infrastructure. US officials said the aid is designed to boost Palestinian public support for faltering peace talks. Prime Minister Benjamin Netanyahu on Wednesday accused the Palestinians of creating "artificial crises" in nascent peace talks and called on Washington to get the negotiations back on track.

"I am concerned about progress because I see the Palestinians continuing with incitements, to create artificial crises...and run away from strong decisions that are needed to make genuine peace," Netanyahu said at a meeting with US Secretary of State John Kerry in Jerusalem. "I hope your visit will help steer them back to a place where we could achieve the historical peace that we seek," he told Kerry. 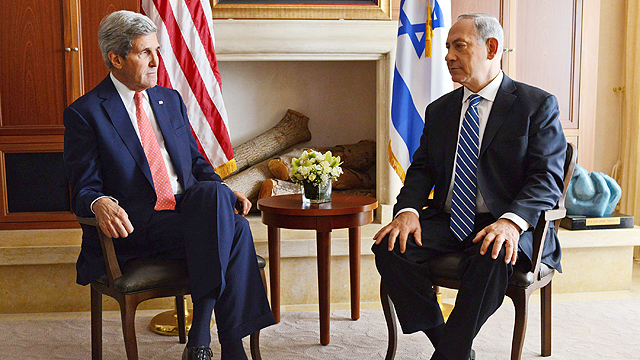 Kerry, Netanyahu meet in Jerusalem (Photo: Kobi Gideon, GPO)
The Palestinians threatened Tuesday night to bolt the talks, after a stormy meeting between negotiators from both sides in Jerusalem, with a Palestinian official telling AFP the negotiations had "broken down." Netanyahu told Kerry at the start of their meeting Wednesday that the Israelis were "scrupulously" standing by the terms of the US-brokered deal under which Israeli-Palestinian negotiations were re-launched in late July after a three-year hiatus. Taking direct aim at the Obama administration's desire for a pause in new sanctions against Iran, Netanyahu also said more pressure on the Islamic Republic is the way to convince the Iranians to prove their nuclear program is peaceful. Netanyahu said pressure "should be maintained and even increased" ahead of a second round of nuclear negotiations between Iran and the five permanent members of the UN Security Council and Germany, which is scheduled to begin in Geneva on Thursday. The Obama administration says it wants to hold off on new sanctions to allow for flexibility in those talks.

This is why I'm here

Kerry did not address the issue of sanctions but did stress that the US will not allow Iran to get a nuclear weapon.

Acknowledging the tensions and difficulties in peace talks, Kerry insisted: "I am very confident of our ability to work through them. That is why I am here." After seeing Netanyahu, Kerry traveled to the West Bank town of Bethlehem for talks with Abbas. There he announced the US would give an additional $75 million in aid to the Palestinian economy. Kerry, announcing the new contribution, proclaimed that "peace is necessary, peace is just and peace is possible." Kerry added: "We are convinced that despite the difficulties, both leaders, President Abbas and Prime Minister Netanyahu, are also determined to work toward this goal." In Bethlehem, Kerry also said the United State will provide an additional $75 million in aid to create Palestinian jobs and help them improve roads, schools and other infrastructure. US officials say the aid is intended to boost Palestinian public support for faltering peace talks with Israel by showing them tangible benefits from the process. The new aid brings the US contribution to a Palestinian infrastructure program to $100 million.

Kerry is scheduled to return to Jerusalem for a meeting with Israeli President Shimon Peres and meet with Netanyahu again over dinner. On Thursday, Kerry plans to travel to Jordan, where he expects to see Abbas for a second time on his current mission.