US Secretary of State John Kerry urged Israel on Wednesday to limit settlement building, an issue that is weighing on Israeli-Palestinian peace talks.

Friction over the talks has risen this past week on the back of Israeli plans, announced in tandem with its release of 26 Palestinian prisoners, for some 3,500 new homes for Jewish settlers in the West Bank and east Jerusalem.

"Let me emphasize at this point the position of the United States of America on the settlements is that we consider them... to be illegitimate," Kerry said after discussions with Palestinian President Mahmoud Abbas. 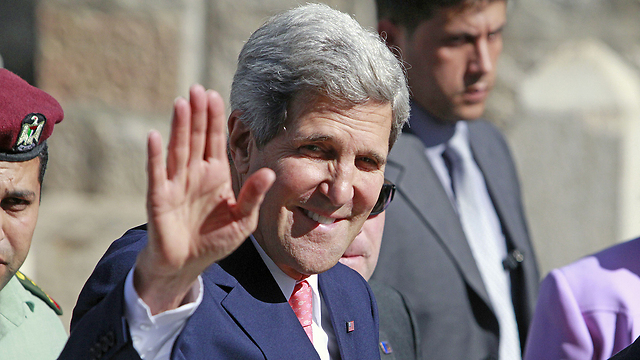 Kerry in Bethlehem after meeting with Abbas (Photo: AFP)

Speaking to reporters in the West Bank town of Bethlehem, Kerry said it would be better if settlement building was "limited as much as possible in an effort to help create a climate for these talks to be able to proceed effectively".

Kerry waded again into the nitty-gritty of faltering Israeli-Palestinian peace talks on Wednesday, saying he was optimistic that tensions and difficulties could be overcome, even between "two proud people" struggling to reach an accommodation.

Kerry was upbeat after separate meetings with Israeli Prime Minister Benjamin Netanyahu and Jerusalem and Palestinian President Mahmoud Abbas in the West Bank town of Bethlehem.

"As in any negotiation there will be moments of up and moments of down," Kerry said, even as both sides traded barbs about who is to blame for the current poor state of negotiations. "But ... we are determined to try to bring lasting peace to this region."

The secretary said, "We are convinced that despite the difficulties, both leaders, President Abbas and Prime Minister Netanyahu, are also determined to work toward this goal."

AP contributed to this article