Palestinian who shot at direction of Israelis in Tapuach Junction killed by IDF unit. Police sappers searching body for explosives. No Israelis injured in incident

IDF soldiers opened fire on Thursday at a Palestinian who shot an improvised weapon at Israelis standing at a bus stop in Tapuach Junction in the West Bank.

The shooter was killed on scene.

Police sappers are searching the body for explosives. No Israelis were hurt in the incident.

The man "opened fire with large fireworks in the direction of the junction where (Israeli) people stood," spokesman Micky Rosenfeld told AFP.

"Security personnel at the scene fired a number of shots at the suspect. He was pronounced dead at the scene," he said. 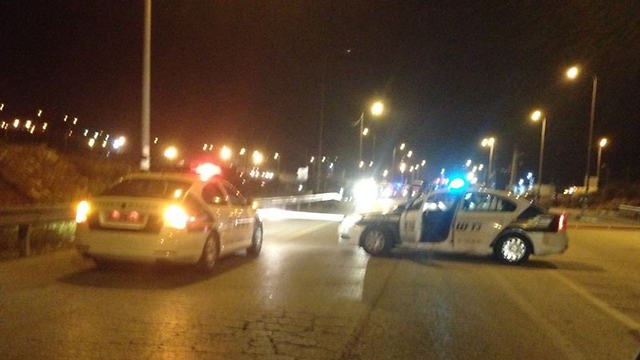 A statement from the Israeli army said that "a Palestinian opened fire at a civilian bus stop at Tapuah Junction near Ariel, using an improvised weapon."

"In order to prevent casualties, IDF soldiers in the area opened fire towards the terrorist. A hit was identified," read the statement.

A high ranking IDF officer said that no advance warning was given for the attack, and that the Palestinian, shot and killed by soldiers, was 29-years-old and "to my understanding, was acting alone."

An eyewitness gave his account of the incident: "I stood at the hitch hiking post with four others when we saw the terrorist running and shooting at us. It looked like flares. Soldiers came, shouted 'take cover,' shot at him and killed him."

Palestinian security officials said Israel had notified them of the incident.