'Deal stalls, talks to spill over next week'

The White House said on Friday it was "premature" to criticize a deal being discussed in Geneva for Iran to curb its nuclear program because an agreement has not yet been reached.

Nonetheless, the White House said that US President Barack Obama has phoned Prime Minister Benjamin Netanyahu late Friday night in a bid to "underscore his strong commitment to preventing Iran from obtaining a nuclear weapon."

Meanwhile, top diplomats involved in the talks told the Los Angeles Times that after hitting unexpected snags, the negotiations are expected to continue until next week.

The Diplomats declined to say why the deal has stalled, but the two sides are known to disagree about Iran's construction of a plutonium reactor, a possible route to a nuclear bomb. The international community wants Iran to agree not to activate the reactor while the interim deal is in place. But they also may be pressing for more restrictions.

Undeterred, with a boost from Russia and China, Secretary of State John Kerry mounted a major diplomatic push with his counterparts from Britain, France and Germany Friday to reach an interim nuclear deal with Iran, despite fierce opposition from Israel and uncertainty in Congress. 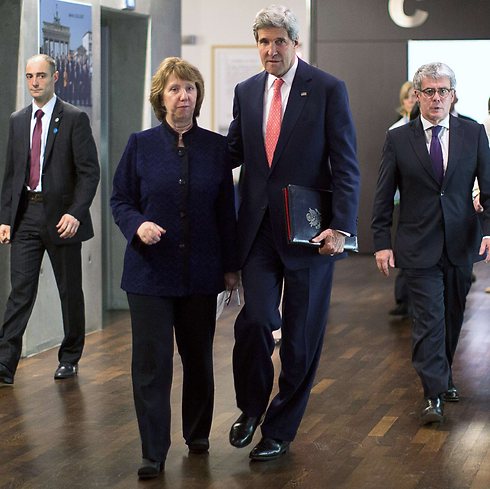 Word that Russian Foreign Minister Sergey Lavrov and a Chinese deputy foreign minister also were headed to the talks provided fresh hope for at least an interim deal, perhaps on Saturday.

But Israeli Prime Minister Benjamin Netanyahu insisted any agreement in the making was a "bad deal" that he said gave Iran a pass by offering to lift sanctions for cosmetic concessions that Netanyahu said left intact Tehran's nuclear weapons-making ability. Kerry tempered reports of progress, warning of "important gaps" that must be overcome in the elusive deal that would offer limited sanctions relief if Iran starts capping programs that could make atomic arms. 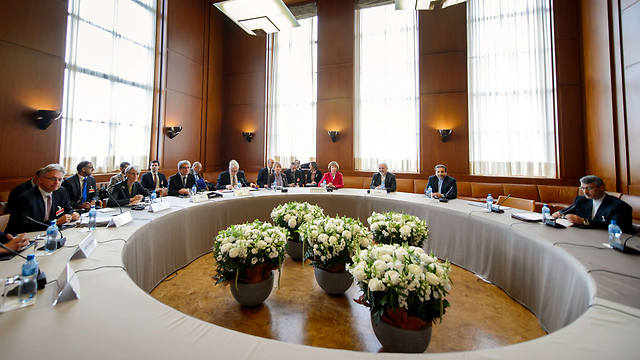 Asked about Netanyahu's criticism, White House spokesman Josh Earnest said "any critique of the deal is premature" because an agreement has not been reached. "The United States and Israel are in complete agreement about the need to prevent Iran from obtaining a nuclear weapon," he said.

Lavrov also was joining the talks, Russia's RIA Novosti news agency reported. His deputy, Sergei Ryabov, was quoted as saying that Moscow expects them to produce a "lasting result expected by the international community." A Western diplomat in Geneva told The Associated Press that China is sending a deputy foreign minister to the talks. 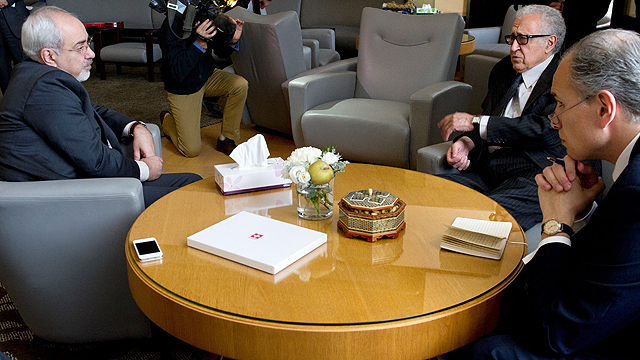 "The negotiations have reached its critical, very sensitive situation, and it needs decisions at higher levels," he said, a reference to the arrival of the foreign ministers. 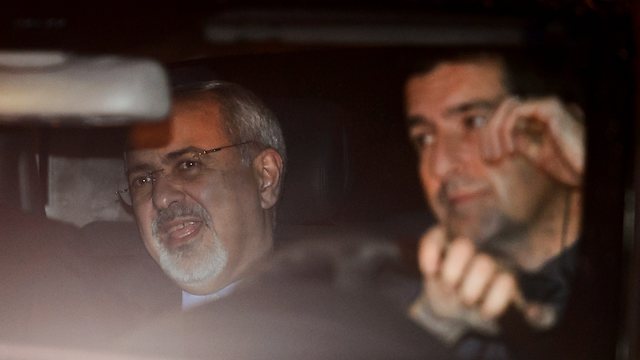 Iranian FM Javad Zarif in Geneva
Any agreement would be a breakthrough after nearly a decade of mostly inconclusive talks, but would only be the start of a long process to reduce Iran's potential ability to produce nuclear arms, with no guarantee of ultimate success.

Kerry arrived from Tel Aviv after meeting Netanyahu and trying to defuse concerns. Israel is strongly critical of any deal that even slightly lifts sanctions unless Iran is totally stripped of technology that can make nuclear arms. The talks primarily focus on the size and output of Iran's enrichment program, which can create both reactor fuel and weapons-grade material suitable for a nuclear bomb. Iran insists it is pursuing only nuclear energy, medical treatments and research, but the US and its allies fear that Iran could turn this material into the fissile core of nuclear warheads. Kerry said there were "some very important issues on the table that are unresolved." 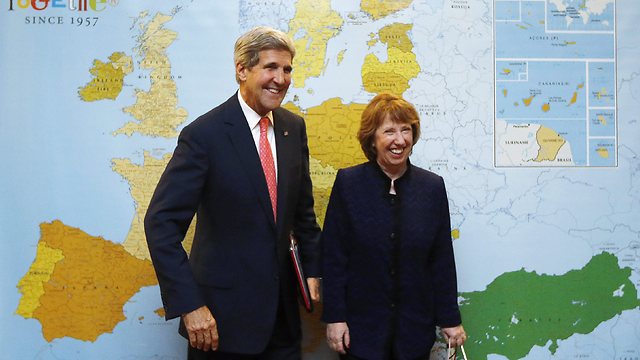 Kerry, Ashton in Geneva (Photo: AP)
"There is not an agreement at this point in time," he told reporters. He was meeting later Friday with his European counterparts before joint talks with Iranian Foreign Minister Mohammad Javad Zarif, and Catherine Ashton, the European Union's top diplomat who is convening the talks. In earlier comments to Israeli television, Kerry suggested Washington was looking for an Iranian commitment to stop any expansion of nuclear activities that could be used to make weapons, as a first step. "We are asking them to step up and provide a complete freeze over where they are today," Kerry said Thursday.

Six powers – the negotiators also include Russia and China – are considering a gradual rollback of sanctions that have crippled Iran's economy. In exchange, they demand initial curbs on Iran's nuclear program, including a cap on enrichment to a level that can be turned quickly to weapons use. Iran, which denies any interest in such weapons, currently runs more than 10,000 centrifuges that have created tons of fuel-grade material that can be further enriched to arm nuclear warheads. It also has nearly 440 pounds (200 kilograms) of higher-enriched uranium in a form that can be turned into weapons much more quickly. Experts say 550 pounds (250 kilograms) of 20 percent-enriched uranium are needed to produce a single warhead. The six have discussed ending a freeze on up to $50 billion (37 billion euros) in overseas accounts and lifting restrictions on petrochemicals, gold and other precious metals. But their proposal would maintain core sanctions on Iran's oil exports and financial sector, as an incentive for Iran to work toward a comprehensive and permanent nuclear accord. A semiofficial Iranian news agency quoted a member of Iran's negotiating team as saying that Iran has asked for the lifting of oil and banking sanctions. "We have announced to the Western side that the issue of oil and banking sanctions has to be taken into consideration in the first step," Majid Takht-e Ravanchi was quoted as telling a Mehr reporter in Geneva. Asked if there will be a deal, he said: "We can't judge at this point whether we will reach a deal or not." White House spokesman Jay Carney said Thursday an initial agreement would "address Iran's most advanced nuclear activities; increase transparency so Iran will not be able to use the cover of talks to advance its program; and create time and space as we negotiate a comprehensive agreement." Tehran could be pressing for more significant relief from the sanctions as part of any first-step deal. Comments from Lavrov suggested an even more basic disagreement – Iran's insistence that the six recognize what it calls its "right" to enrich uranium. Washington and its Western allies say such a right does not exist, despite Tehran's claim that it is enshrined in the nuclear Nonproliferation Treaty. Lavrov, in comments to reporters in Moscow, said Russia believes a deal should recognize Iran's right to enrich, adding once that happens, "it will be possible to start moving forward." French Foreign Minister Laurent Fabius spoke of progress, but told reporters "nothing is hard and fast yet." "I've come to Geneva to take part in the negotiations because the talks are difficult but important for regional and international security," he said. Israel has been watching the talks with deep concern. It has frequently dangled the prospect of military action against Iran should negotiations fail to reach the deal it seeks – a total shutdown of uranium enrichment and other nuclear programs Tehran says are peaceful but which could technically be turned toward weapons. "I understand the Iranians are walking around very satisfied in Geneva as well they should because they got everything and paid nothing," Netanyahu told reporters before meeting Kerry. Members of Congress were awaiting the details of any deal between Iran and world powers, but hard-liners were pushing for even stricter sanctions that go well beyond the ones crippling Iran and that the Islamic Republic is hoping to ease. Despite the talks in Geneva, proposed new sanctions could show up as amendments to a defense authorization bill that the Senate will debate later this month. Many of the lawmakers have the same demand as Netanyahu: They want enrichment to stop altogether in exchange for loosening sanctions. "Any agreement that does not require the full and complete halting of the Iranian nuclear program is worse than no deal at all," said House Majority leader Eric Cantor. "We should not race to accept a bad deal, but should keep up the pressure until the Iranians are willing to make significant concessions."

Criticism also has begun bubbling up from some leading pro-Israel groups in Washington. White House officials met some of the more hawkish American Jewish leaders last week but failed to win broad support for a pause in further sanctions against Iran.

"Any deal that breathes life back into Iran's economy in return for token and superficial moves that put Tehran no further from nuclear breakout ... appears to be a horrific strategic error," said Josh Block, chief executive officer of The Israel Project, a non-partisan, pro-Israel organization.

There was no immediate comment on the Geneva talks from the largest and most influential pro-Israel lobby, the American Israel Public Affairs Committee, or AIPAC.

Iran's new moderate leadership is being pushed by hard-liners seeking significant sanctions reductions in exchange for scaling back enrichment.