Barring a late breakthrough, talks between Iran and six world powers on Tehran's nuclear program are likely to end on Saturday without an agreement, but are expected to resume in a few weeks, Western diplomats said. "Clearly, efforts are still going on," one diplomat said.

Iranian Foreign Minister Mohammad Javad Zarif said Saturday "We have reached an agreement on some questions, but on others there are still disagreements...There are differences of opinion within the P5+1 group" of world powers, he was quoted as saying by Iranian news agency ISNA, amid crucial talks in Geneva, adding that talks would resume in "seven to ten days" if no deal was reached.

Iranian President Hassan Rohani Saturday urged world powers not to miss an "exceptional opportunity" to reach an agreement: "I hope that the P5+1 group make the most out of this exceptional opportunity that the Iranian nation has offered to the international community, so that we can reach a positive result within a reasonable timeframe," he was quoted as saying by official IRNA news agency. 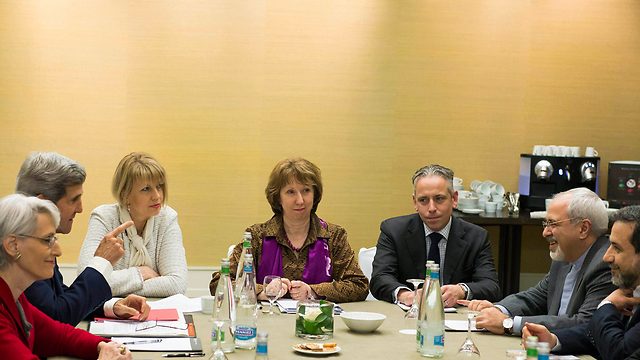 A proposed first-stage deal on Iran's nuclear program needs to be reached on Saturday or talks will move on to a later round, Tehran's lead negotiator was also quoted as saying.

"The negotiations will not go on tomorrow. Either they end tonight or there is another round," Iranian news agencies quoted Deputy Foreign Minister Abbas Araqchi as saying after crucial talks in Geneva stretched into a third day.

"Serious consultations have been held on the text of the final deal, (but) there are still questions that require more negotiations," he said.

Araqchi's comments came amid hopes that world powers and Iran will manage to seal a breakthrough in the decade-long dispute after US Secretary of State John Kerry and his Russian, British, French and German counterparts all rushed to Geneva to lend weight to the negotiations. 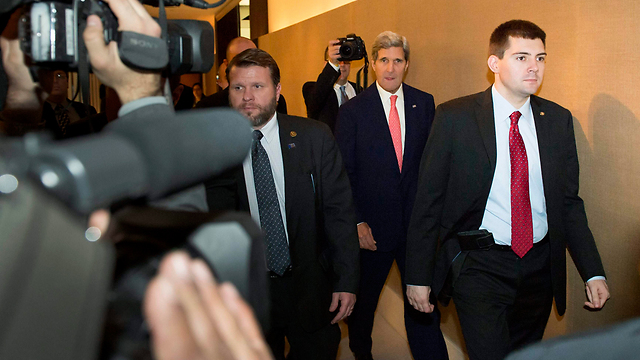 Kerry in Geneva (Photo: Reuters)
Nonetheless, the New York Times quoted a senior US official as saying that “It’s important that Iran knows we’ll walk away if our concerns aren’t met,” adding that "we do have substantive outlines set well enough that it’s worth trying to narrow gaps.” The New York Times further noted that “The more details Israel accumulates regarding the deal taking shape in Geneva,” it quotes a senior Israeli official as saying, “the greater the astonishment at the haste to sign an agreement that is so bad for the world.” Fabius said earlier in the day there was "no certainty" a deal could be reached and that Israel's "concerns" need to be taken into consideration.

Hossein Naqavi Hosseini, spokesman of the parliamentary foreign affairs committee, said "the behavior of the French representative in the nuclear talks shows that France is trying to blackmail" Iran.

"While the French people want better ties between Tehran and Paris, unfortunately the French government prefers the will of Zionist regime," said Naqavi Hosseini.

Esmaeel Kosari, a fellow conservative and member of the committee, expressed regret that Fabius's comments "express the positions of the Zionist (Israeli) regime, which prompts us to eye the talks with pessimism."

Fabius told France Inter radio that "there is an initial draft that we do not accept...As we speak, I have no certainty that we can finish up."

"There are some points on which we are not satisfied," he said, citing the "extremely prolific" Arak nuclear reactor and the question of uranium enrichment. Fabius also expressed concerns over Iran's stockpile of 20% enriched uranium.

Moreover, Iran's refusal to suspend work on a plutonium-producing reactor and downgrade its stockpile of higher-enriched uranium was standing in the way of an interim agreement, France's foreign minister said Saturday. A Western diplomat in Geneva for the talks told The Associated Press that the French were holding out for conditions on the Iranians tougher than those agreed to by the US and France's other negotiating partners, raising doubts a final deal could be struck Saturday. The French position was confirmed by another Western diplomat. Both gave no specifics and demanded anonymity because they were not authorized to comment on the diplomatic maneuvering.

"We are hoping for a deal, but for the moment there are still issues that have not been resolved," Fabius said.

Signaling that the talks could end without agreement, British Foreign Secretary William Hague spoke of unresolved issues and told reporters "there is no fixed time for us to reach a conclusion." AFP, Reuters and the Associated Press contributed to this report